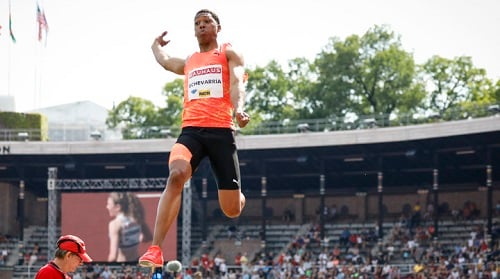 Juan Miguel Echevarría opened his season with a huge leap of 8.92m in the long jump at the Copa Cuba in Havana on Sunday, March 10.

The 20-year-old World indoor champion Echevarría jumped 8.92m with a little help of 3.3m/s strong tailwind on his very first attempt in the long jump. Unfortunately, the Cuban had to withdraw from the competition with a minor ankle sprain.

Echevarría's mark is the 4th best in history under any conditions. The world record of 8.95m belongs to American Mike Powel since 1991.

There was another impressive wind assisted performance in the women's triple jump by Liadagmis Povea who leaped 15.05 with a +3.0m/s wind.