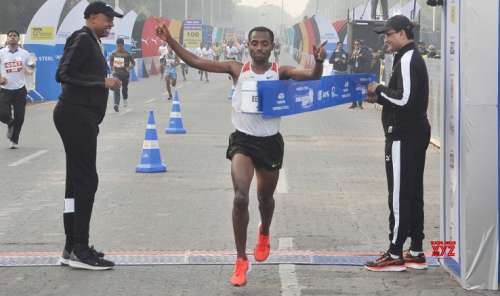 We list finest road races you should not miss this weekend.

The top event this weekend is Shenzhen Marathon which is an IAAF silver road race.

Both men's women's races have very strong elite fields led by Eastern African athletes. Ethiopia's Markos Geneti is the fastest runner in the men’s field with a 2:04:54 PB from Dubai in 2012. His most recent performance comes from 2017 Guangzhou marathon where he took second place with 2:10:06. The men's field also includes David Kiyeng of Kenya, who clocked his PB of 2:06:26 in Daegu in 2009 and his compatriot  Edwin Kipngetich, who broke the Italian all-comers’ record with 2:07:13 at Milan marathon last April.

Note: (Two weeks ago at  Shenzhen Half Marathon more than 250 runners were caught cheating.)

Kolkata 25K was born in 2013, but since then it has grown as one on the best road races in India and Asia.

Race organizers are expecting a new men's 25KM World record. The men's race will see a clash between Kenya's Eric Kiptanui (58:42 half marathoner) and Ethiopia's Birhanu Legese (2:04 marathoner). Both athletes say they are in shape to challenge the world best of 1:11:18 set by Kenyan Dennis Kimetto in Berlin in 2012.

Kenenisa Bekele, who won the race last year in a new Ethiopian record last year, is not among the participants this year.

Ethiopia's Degitu Azimeraw is returning to defend her title from last year. Azamara, took a surprise victory last year by winning the race in a new course record of 1:26.01 in her first international race ever.

Other two road races worth to follow are Bangsaen21 Half Marathon in Thailand and  Mersin Marathon in Turkey.