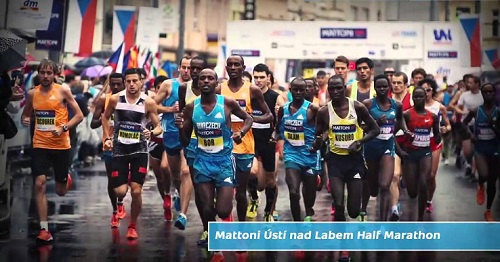 The Ferrari among races, also known as the Mattoni Ústí nad Labem Half Marathon will take place this year on September 15th.

Top times under one hour are recorded here on a regular basis along with an impressive array of personal bests. As ever this year Ústí will be keen to live up to its reputation as a fast and appealing race. And if the start list is anything to go by, they have little to worry out. Runners to watch out for include two-times winner Barselius Kipyego from Kenya plus a total of eight athletes who have run the half marathon in under an hour! We can also look forward to some strong women contenders from Kenya, while Czechs will be particularly excited to check out the marathon bronze medallist from the European championships in Berlin - Eva Vrabcová-Nývltová.

The Mattoni Ústí nad Labem Half Marathon (an IAAF Gold Label race) proved its status as a fast race right from its inception in 2011 and the RunCzech team organisers are confident that the magnificent series will continue in the same vein this year. “Over the past two years the fastest men have run in under one hour and when I look at the start list for this year, I have no reason to doubt it will be any different,” says Carlo Capalbo President of the RunCzech Organising Committee and Chairman of the IAAF Road Race Commission.

Kenyan runner Barselius Kipyego will be making an appearance and keen to win his third race in a row (In RunCzech’s twenty-five year history only Belarusian Jelena Vinickajova has achieved this feat – at the Prague Marathon between 1996 and 1998). Kipyego boasts an impressive record in Ústí – second place in 2015, first place and a race record in 2016 followed by another win and record last year at 59:14 while also securing the fifth fastest time in the world for the year.

Kipyego will be coming to Ústí with the greatest of ambitions. According to the Coordinator of the Elite Athletes, Jana Moberly: “Barselius will be keen to take up where he left off with last year’s win and won’t be afraid of attempting a new race record. He will face competition from seven other men with half marathon personal bests under one hour which is the best the Ústí race has ever played host to. This only goes to show the top-notch athletic calibre appearing at this year’s event.”

Ethiopian long-distance runner Guye Adola is the fastest half marathon runner taking part – with a time of 59:06 recorded in 2014 in New Dehli. Other favourites to win include RunCzech Racing Team member Josphat Tanui (59:22) plus another Kenyan runner, Albert Kangogo (59:25). Japan will also be bringing along a strong team to Ústí nad Labem this year headed by Keita Shitara and Kenji Yamamoto. Meanwhile Jared Ward from the U.S. who finished sixth in the Rio Olympics Marathon will want to follow up on Galen Rupp’s sensational victory in the Volkswagen Prague Marathon.

We can also expect to witness some decent times among the women with two Kenyans – Nancy Kiprop and Lucy Cheruiyot, both familiar with the Ústí course, after setting personal best times here in 2017 expecting to challenge for the win. Other serious contenders for a spot on the podium include their compatriot Diana Kipyokei plus the American runner the recent U.S.20k Champion Sara Hall. Japanese runner Yuka Takashima, with a 31:33.3 10,000 in Palo Alto last year should also be in the mix along with Moldova’s Lilia Fisikovici who triumphed at the Mattoni České Budějovice Half Marathon this June.

Czech fans in search of local long-distance stars are also in for a treat with a group headed by Eva Vrabcová- Nývltová. Following on from a bronze at the European Championships marathon in Berlin this year, she’s gradually getting back into full training mode and will certainly be keen to take last year’s performance of 1:11:22 (and with it a new Czech race record) up a notch or two. Capalbo revealed: “We’ll have to wait until Saturday’s Birell Prague Grand Prix to find out what kind of shape Eva Vrabcová-Nývltová is in, but we have a fair idea it’ll will be worth checking her out in Ústí.

When it comes to the Czech men, the usual favourites are set to take part with another duel expected to play out between Jiří Homoláč and Vít Pavlišta. Both runners will also be competing at the Birell Prague Grand Prix this Saturday.

The eighth Mattoni Ústí nad Labem Half Marathon kicks off on Saturday 15 th September at 3pm CET. The event will be streamed live on ČT sport and at www.runczech.com.