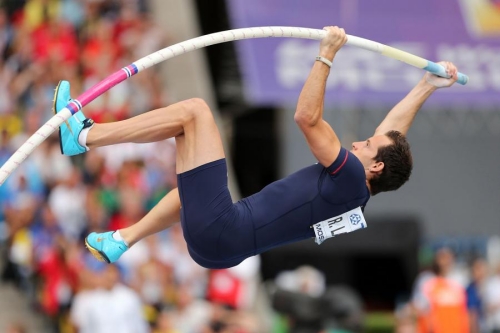 Four Olympic champions, five World champions and six European gold medallists will be in action at the fifth edition of the ISTAF INDOOR meeting in Berlin on Friday evening.

Renaud Lavillenie of France and Brazil’s Thiago Braz, winners of the 2012 and 2016 Olympic titles respectively, will meet in the pole vault, while Tianna Bartoletta of the USA has set her sights just as high with a double start: the Olympic long jump and sprint relay champion will run the 60m as well as competing in her specialist field event. Special safety nets will be installed for the discus competition which closes the meeting and this promises to be another highlight with the presence of Berlin’s very own Olympic champion from the 2012 London Games, Robert Harting.

11,800 tickets for the biggest indoor athletics meeting in the world have already been sold. The schedule comprises seven events: men’s and women’s 60m and 60m hurdles, women’s long jump, men’s pole vault and men’s discus. The indoor arena does not have a 200m oval track, hence the absence of other running events.

“Spectators can look forward to seven top quality events with the ISTAF INDOOR once again offering the prospect of thrilling sport. I’m especially delighted that, in addition to athletes of the highest international class, we’ll also have many young German athletes who are producing such strong performances at present and should put the established stars under pressure. For them – and for all the other European athletes – the ISTAF INDOOR will be the first significant test on the road to the European Championships in Berlin in August,” said the meeting director Martin Seeber.

The men’s pole vault has the strongest strength in depth of this year’s ISTAF INDOOR with two Olympic champions, Renaud Lavillenie of France, the 2012 gold medallist, Thiago Braz of Brazil, the 2016 winner and last year’s event winner Piotr Lisek from Poland. Lavillenie is the current world record holder with 6.16m and also the ISTAF INDOOR meeting record holder, having cleared 6.02m in Berlin two years ago. Lavillenie leads the current world rankings with 5.86m with Lisek second on 5.78m. The strong line-up also includes Germany’s Raphael Holzdeppe, the 2013 World champion and Shawn Barber of Canada, winner of the world title in 2015.

The only man to have achieved three victories in the ISTAF INDOOR is Kim Collins from the Caribbean islands of St. Kitts and Nevis. Last year he had to settle for second place so the big question is: can the 41-year-old meeting record holder (6.50 in 2015) and crowd favourite win for the fourth time? The 2003 World champion at 100m takes on rivals who include China’s record holder Su Bingtian, whose best is also 6.50. Other sprinters to watch should be Julian Reus of Germany and Churandy Martina from the Netherlands.

The favourites for the 60m hurdles are the current European Indoor champion Andrew Pozzi of Britain and last year’s event winner Balázs Baji of Hungary. The latter won the bronze medal at the 2017 World Championships in London.

The discus will showcase the skills of the local hero Robert Harting. His brother Christopher, surprise winner of the Olympic title in Rio in 2016, has had to withdraw because of jaw surgery and consequent loss of training. Robert Harting begins his final year of competition with the ISTAF INDOOR in Berlin on Friday. Among his rivals will his compatriot Martin Wierig, the meeting record holder with 64.82m in 2014 and Austria’s Lukas Weißhaidinger.

Germany’s fastest sprinters: Gina Lückenkemper, Lisa Mayer and Tatjana Pinto will be able to test their form against each other in the 60m. They’ll have top calibre international competition as well in the shape of the double Olympic champion Tianna Bartoletta from the USA, sprint relay and long jump gold medallist in Rio and Marie Josée Ta Lou of the Ivory Coast who came away from the 2017 World Championships with silver medals in both 100m and 200m. “The great atmosphere at the ISTAF INDOOR will make it a fantastic experience as ever. The fans will see fast times,“ said Gina Lückenkemper, who improved her best last year for the 100m outdoors to 10.95.

Tianna Bartoletta plans a double bill at the ISTAF INDOOR by competing in the long jump as well as the sprint. She has already jumped 7.17m outdoors – that was at the Olympic Games in Rio – her indoor best is some way short of that mark with 6.80m. Bartoletta’s opponents on Friday will include the German long jumpers Sosthene Moguenara and Alexandra Wester. The latter holds the current meeting record with her leap of 6.95m in 2016.

Two strong German contenders will be in action in the 60m hurdles in the shape of Pamela Dutkiewicz, the World Championship bronze medallist in London last year and Cindy Roleder who is making a comeback after a long absence because of injury. Their opponents include Alina Talay of Belarus, twice winner of the European Indoor title and Christina Manning from the USA.

Live reporting of the ISTAF INDOOR will be provided on Twitter. More information is available at: www.istaf.de