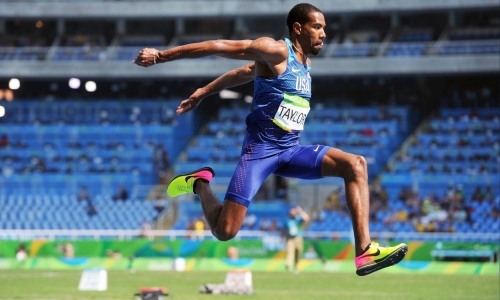 Luvo Manyonga, Cristian Taylor and Will Claye failed to break world records in long jump and triple jump at 3032m altitude in a breezy day in Tignes, France on Wednesday, August 16.

Manyonga attempted the men's long jump record, while Christian Taylor and Will Claye tried to break triple jump record in a windy day in French Alps.

“Luvo showed real guts today. His first four attempts were all no jumps. A lesser athlete might just have decided to give up especially in such difficult conditions, but that is not who Luvo is. He is a true fighter who was never going to give up without giving it a proper go right to the end of the competition.”  Manyonga's coach Neil Cornelius told reporters.

“During each of Luvo’s first four attempts the wind was blowing at approximate speeds of 3.5m/s. What made it even more difficult was that Luvo had to get used to being much faster in his approach at such a high altitude. He had a massive second jump.”

The triple World and double Olympic champion Christian Taylor of the United States failed to set triple-jump world record as he jumped only 16.99m. Taylor even finished behind his country man Will Claye who managed 17.42m.

"There was a lot of talk about the world record," Taylor said.

"At the beginning I was a little lightheaded, I tried not to think about it, I tried to do everything as normal.

"I realised I needed to control my breathing but with every run I became a little more comfortable and also with the runway.

"I didn't do the indoor season so I'm really not used to elevated runaways. It's my first time since 2013 I've been on a track like this.

"I'm not used to the bouncy response, I was not able to get off of it. But once I realised what I needed to do I just started to increase, increase, increase but it was just not far enough. Now I know for the future what to expect."

Men's triple jump record of 18.29m was set back in 1995 by Johnathan Edwards of Great Britain.