• Christian Coleman Could Be Faster than Usain Bolt 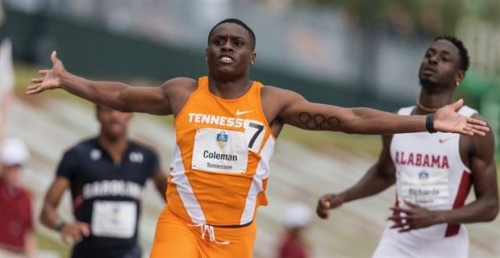 The United States of America has the highest number of medals at an Olympics with 1,022 gold medals, and a total tally of 2,520 medals so far. In spite of such an absolutely awe-inspiring record, soccer has not been the country’s strong suit in the Olympics. In light of the situation, a number of reputed universities are offering soccer scholarship deal to talented players in the US, so that they can continue to play the beautiful game and bring the nation’s name up higher on the world map of soccer.

However, where the US has always excelled is athletics, and Christian Coleman is all ready to carry that torch forward for his country in the coming years. In order to understand the tremendous potential Coleman holds on the track for the US, one needs to take a closer look at his recent records, which he has been setting both nationally and internationally.

Coleman Is Faster than Bolt was at His Age

Coleman represented the University of Tennessee last week at the NCAA Outdoor Championships in Eugene, where he broke the collegiate record in Men’s 100 Meters Sprint during the first heat of the semi-finals. His record of 9.82 seconds is actually faster than that of Usain Bolt’s when he was of the same age as Coleman. Although Bolt did complete his first under-10 seconds run at a faster time of 9.76 seconds, he was at that point quite a few months older than the young athlete is now.

Coleman is Among the Four Fastest Americans Ever

At a young age of 21, Christian Coleman has already left a number of famous athletes behind to secure his place as the fourth fastest US athlete to ever run the 100m race. Maurice Greene, Justin Gatlin, and Tyson Gay are the only three athletes in the history of American 100m sprinting who have finished a race faster than Coleman. Considering how many years he has ahead of him, it wouldn’t be surprising if he surpasses all of them and positions himself as the number one sprinter in the US, and perhaps even in the entire world.

The Mentorship of Justin Gatlin

The legendary Gatlin is working with Coleman to improve his time and as can be seen from the results, it’s quite clearly working. Although he did make it to the Rio Summer Olympics team last year, hopefully, the man from Atlanta will see more success in Tokyo 2020 under the Olympic Gold Medal winner’s guidance. They do share a lot of similar traits because, after all, Gatlin is the only other sprinter to win all four national championships in a single academic year.

Coleman isn’t nearly as tall as the 6 ft. 5, 200+ lbs Usain Bolt, but the 5 ft. 9, 155-pounder has weight and aerodynamics on his side. While it cannot be denied that the 9.58 seconds record that Bolt set back in 2009 doesn’t seem like something that Coleman can touch at the moment, many experts of the sport are speculating that the young athlete could be going pretty close to that in a year or two.