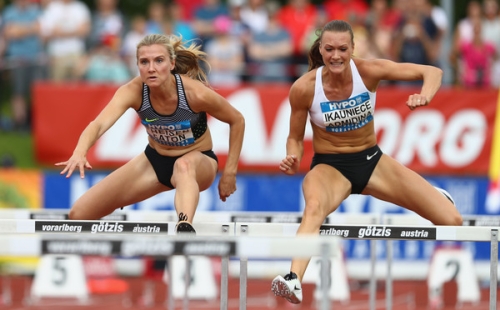 Olympic champion Nafissatou Thiam of Belgium won the 2017 Hypo Meeting Gotzis with an impressive 7013 points to move her in #3 in history. Thiam on day two had two personal bests in the javelin of 59.32m and in the 800m 2:15.24. Second place in the women's heptathlon took Carolin Schafer of Germany with a PB of 6836 while podium concluded Latvia's Laura Ikauniece-Adminina with a new National Record of 6815 points.

After blazing 22.81 seconds for the win in the 200m Great Britain's Johnson-Thompson took the lead in the heptathlon in Gotzis.

Only six points separate the top three after the first day of the heptathlon in Gotzis with Johnson-Thompson in lead with 4059, Thiam in second 4056 and Schafer in third.

Olympic champion Thiam Nafissatou took the lead in the meet with 2285 points after clearing world leading 1.98m in high jump beating Katarina Johnson-Thompson 1.95m (2017 World #2). Nafissatou is on a pace to a new personal best.

After day one, Damian Warner is in lead. The Canadian decathlete extended his lead in from 80 pints after 3 events to 153 points after the 400m dash. Meanwhile to second place moved Pierce Lepage of Canada with 4379 while Ukraine's Oleksiy Kasyanov remained in 3rd with 4352.

Defending Hypo-Meeting Gotzis champion Damian Warner of Canada is a clear leader after 3 events with 2767 points. He won the 100m with 10.35 seconds and Long jump with 7.85m leap.