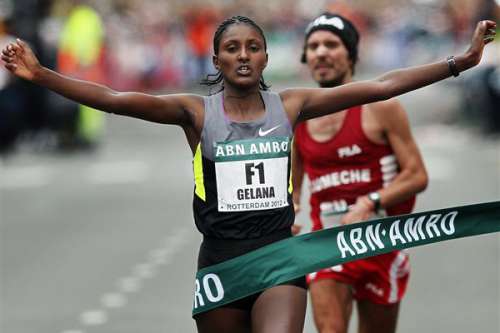 Yokohama International women's marathon for the Olympic champion will be the first marathon on Japanese soil, but not the first road race as she managed to win 2012 and 2013 Marugame Half Marathon.

Gelana holds a season best time of  2:26:58 from London marathon, but still remains the pre-race  favorite. In the 2012 Olympic year Gelana set a massive PR of 2:18:58 by winning Roterdam marathon and is the fastest among the entrants for the race this weekend.

Another elite runners that will line up on Sunday are the Kenyan pair of Philes Ongori and Caroline Rotich, who hold exactly the same personal bests of 2:23:22. The top marathoners from Europe will be Ukraine's  Olena Shurhno, along with Portugal’s Marisa Barros who are also strong enough to challenge East African nations for the victory.Japanese runners Azusa Nojiri  (2:24:57) and Tomomi Tanaka  (2:26:05) will definitely add some spice in to the Sunday's race.

the 6th edition of Yokohama international women's marathon is scheduled for Sunday, November 14.