It was a great display of sprinting tonight from Usain Bolt and Jamaica as the small Caribbean nation´s men´s and women´s teams smashed the Commonwealth games 4x100m relay records. 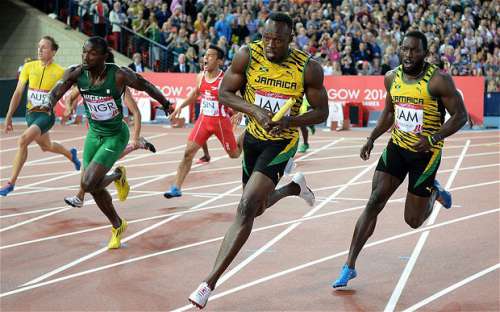 The last two events in the the spectacular final day of the track and field competition were women´s and men´s 4x100m finals.

In the women´s race Jamaican team stacked with world class stars dominated the race from the gun as Shelly Ann Fraser-Pryce anchored to victory in a new commonwealth games record of 41.82 seconds.

In the men´s race as usual all eyes were on the world fastest man Usain Bolt.  The six time Olympic champion had to sweat way more tonight as he received the baton a couple of metres behind English team and needed to push himself hard to beat Danny Talbot to win the race in a new games record of 37.68 seconds.

The second place finisher England clocked 38.02 while Trinidad and Tobago finished in third 0.08 behind English men.