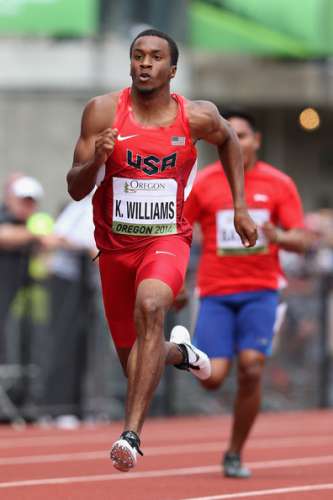 The evening of the second day of the World junior champs in Eugene turned out brilliant for Kendal Williams of the United States as he took a surprise win in the men´s 100m final clocking a new personal best of 10.21 on Wednesday evening.

Right before the men´s final was the women´s 100m final in which Great Brittain´s Dina Asher-Smith dominated the race from the gun taking the gold for her country in 11.23 seconds. Ecuador´s Ángela Tenorio took silver in 11.38 seconds while USA´s  Kaylin Whitney won the bronze medal on 11.45.

The women´s long jump world junior crown went to Barbado´s Akela Jones, who leaped in second her attempt 6.34m facing a strong head wind of -2.7ms. Nadia Akpana Assa of Norway took second with 6.31m (wind -0.4), while Germany´s  Maryse Luzolo took bronze with a mark of 6.24m (wind -1.5). The negative wind and cooler temperatures tonight was a major factor of lower performances by athletes all over the competition.

Morgan Lake of Great Brittain took the first gold in this championships for her country as she won the women´s heptathlon with a new personal best mark of 6148 points. Cuba´s Yorgelis Rodríguez also passing magic 6000 point marker took the silver with 6006 points and Netherland´s Nadine Visser grabbed bronze with 5948 points.