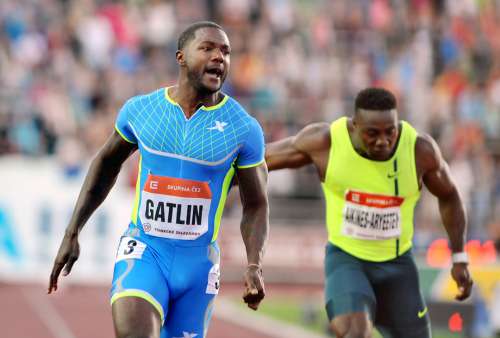 American sprinter Justin Gatlin won the 100 metres at the Golden Spike meet on Tuesday, clocking 9.86 seconds to improve his own world-leading time of the year.

Gatlin pulled away from the rest of the field from the start, easing to his eighth victory of the year despite facing a head wind of 0.4 meters per second.

Gatlin had promised to "do something very special" at the meet, which part of the IAAF World Challenge series.

"I felt good to come out here to run another world leading time," he said. "I was looking for a better time but I'm very happy with it."

Gatlin had set the previous world-leading time of 9.87 at the Beijing World Challenge meet last month.

Gatlin came to Ostrava to replace Usain Bolt, the Olympic and world champion who announced this month he would skip the Golden Spike and a Diamond League meet in Paris on July 5 because he was behind with his training following a foot injury.

Gatlin was the only sprinter to beat Bolt last year, edging him at the line in the 100 in Rome last June, but was beaten by him at the worlds two months later.

"I hope he gets better," Gatlin said about his rival. "I hope his foot heals up and hopefully I'll see him this year, or maybe next year. I want to race against the best."

Gatlin, the 2004 Olympic champion, said he doesn't plan to compete at the U.S. championships this year but planned to return to Europe to "run some fast races ... hopefully to get to the low 9.7s, maybe high 9.6s."

LaShawn Merritt dominated the men's 400 with a time of 44.16, with Isaac Makwala of Botswana coming in second in 44.83 while Briton Martyn Rooney was third in 45.03.

In the women's 200, U.S. sprinter Allyson Felix proved she's getting back to her top form after collapsing on the track with a torn hamstring at last year's worlds.

"It's a bit weird for me to reach a perfect shape after my injury," said Felix, who clocked 22.75. "The wind here disturbed me a bit."

Olympic pole vault champion Renaud Lavillenie also said the wind hampered him, but he won nonetheless with a jump of 5.83 meters for his seventh straight victory this season. Raphael Holzdeppe of Germany, who upset Lavillenie at last year's worlds, finished sixth after clearing 5.53.