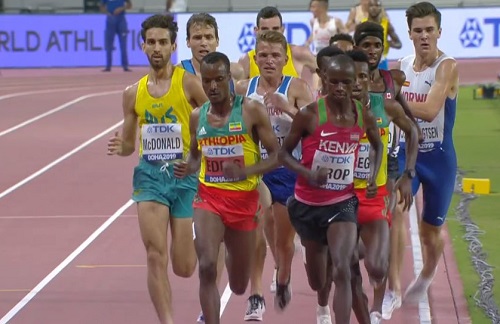 Norway's 19-year-old Jakob Ingebrigsten's disqualification from the men's 5000m made the headlines in the opening day of 2019 the World Athletics Championships in Doha on Friday.

About two hours later IAAF announced that Jacob Ingebrigsten has been reinstated in the 5000m final after Norway's track and field team's appeal.

Originally, Ingebrigtsen was disqualified from the 5000m soon after finishing his qualification heat in 4th place and qualifying automatically for the Monday's final. He was disqualified for taking at least three steps on the inside of the track with 200m remaining. The incident occurred in the back straight about 220m before the finish line when Bahrain's Birhanu Balew bumped Ingebrigsten making the Norwegian runner step on inside of the track.

Norwegian athlete Jacob INGEBRITSEN (bib number 1334) was disqualified for stepping inside the kerb.

The Norwegian Team presented an appeal to the Jury, claiming that their athlete had been pushed 200m before the Finish Line and forced to step out.

The Jury of Appeal reviewed the video and concluded that all three steps taken inside the kerb by the athlete were the result of a contact with another athlete. No material advantage was gained.

The Jury of Appeal, therefore, decided to accept the appeal presented by the Norwegian Team and the result will be modified accordingly.