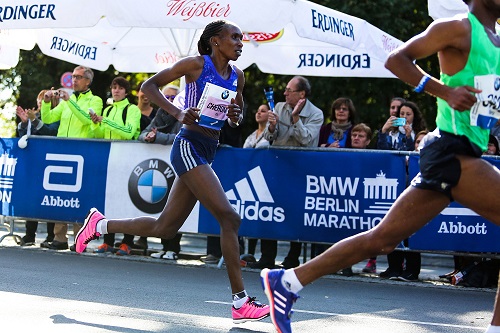 BMW Berlin Marathon 2019 - Gladys Cherono is keen to write another chapter of history on Sunday in Germany’s biggest and most spectacular Road Race.

A year ago the Kenyan broke the course record in the BMW BERLIN-MARATHON which had stood for 13 years and a fourth triumph here would give her more wins than any other female runner. Cherono has a further goal in breaking her course record of 2:18:11. While the elite are aiming to produce world class times of under 2:20, Melat Kejeta is hoping to run 2:22 which would be a sensational debut at the distance for the former Ethiopian who received German citizenship only in March. The Olympic qualifying time for the women’s marathon in next year’s Games in Tokyo is 2:29:30, a target also shared by the home favourite Anna Hahner.

This year the BMW BERLIN-MARATHON has already established a record with 46,983 runners entered. “We were able to increase the limit by 3,000 runners and with 150 nations represented, this is also a record. It will really be a world of runners on the startline,” said Jürgen Lock, CEO of the organizers, SCC EVENTS. On Sunday morning the marathon runners will start at 9.15 on the Avenue of June 17 while the handbikers and wheelchair athletes will be underway at 8.50 am.

“We definitely have one of the strongest women’s fields in the history of the event, even though we have had a couple of withdrawals,” said race director Mark Milde. “We have to wait and see, of course, what turn the weather takes. But I hope that the women’s course record will be under pressure on Sunday.”

Gladys Cherono is aiming to maintain her flawless series in Berlin on Sunday. She has won all of her three appearances at the BMW BERLIN-MARATHON. This achievement puts her in the same distinguished company of record Berlin winners as Renata Kokowska of Poland, Germany’s Uta Pippig and Aberu Kebede of Ethiopia. “I’ve trained well and my aim is to retain my title,” said Cherono and added: “I hope also to set a personal best.” She set her best of 2:18:11 last year in Berlin and this currently makes her the sixth fastest woman of all time at the distance.

Although Vivian Cheruiyot, Gladys Cherono’s fellow Kenyan, has had to withdraw because of achilles tendon problems, there is another rival who might become her strongest challenger: Meseret Defar, judging by her performances on the track, could have the potential to run under 2:20. The Ethiopian twice won Olympic titles at 5,000m, in 2004 and 2012 and has a best of 2:23:33 from her two marathons to-date. “In the last few years I often had injuries but now I’ve been training well. I decided to run Berlin because the course is so fast,” said Meseret Defar, who wants to break her personal best by a big margin on Sunday.

Also among the favourites should be Mare Dibaba, even though the 2015 World Marathon Champion and 2016 Olympic bronze medallist hasn’t shown her best form recently. “My aim is to run at the level of my personal best,” explained Dibaba, who has twice achieved the distinction of running 2:19:52.

The women have broken 2:20 nine times previously in the history of the BMW BERLIN-MARATHON. The first to do so was the Japanese Naoko Takahashi who ran 2:19:46 in 2001, one year after winning the Olympic title. The chances look good for this landmark to be achieved for a tenth time on Sunday.

Melat Kejeta sprang a surprise in Thursday’s press conference when she gave her target as running 2:22 and on her marathon debut. Such a time would make her the third fastest German woman marathoner of all time. Only the national record holder Irina Mikitenko (2:19:19) and Uta Pippig who ran 2:21:45 in Boston, though that course is not officially recognized, have run faster. “I will do all I can to run a very good personal best time. My aim is 2:22,” announced Melat Kejeta, whose half marathon best if 68:41.

Anna Hahner knows the course as well as anyone since this will be her fifth BMW BERLIN-MARATHON. “This time it’s more like a home game for me,” said Hahner. The 29-year-old has been a member of the SCC EVENTS Pro-Team since the start of the year but lives mostly in Munich while regularly attending training sessions in Berlin. After a long spell of injury and making a fresh start she isn’t yet in top form. “But even with a semi-specific preparation – I haven’t run more than 120 kilometres a week but also trained a lot on the bike – I am confident I can run the Olympic qualifying time of 2:29:30,” said Anna Hahner, whose fastest marathon so far is the 2:26:44 in Berlin in 2014.