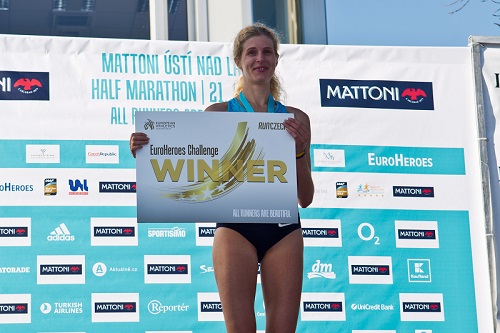 The EuroHeroes Challenge, a revolutionary series created in collaboration with RunCzech and European Athletes, has drawn to a close. Italian runner Yassine Rachik and Ukrainian Daria Mykhailova have emerged as the overall winners of this four-part event. Rachik clearly dominated the whole season, while Mykhailova reigned supreme in the women’s category with a heroic final race performance.

Twenty-five year old Rachik was the brightest star in the men’s field. With his endurance levels, fast pace and dominance, he bowled over crowds right from his first race, fending off the competition at the Mattoni Karlovy Vary Half Marathon, Mattoni České Budějovice Half Marathon as well as the Mattoni Olomouc Half Marathon with ease. Three consecutive victories and, above all, fantastic times on the scoreboard, gave him such a decent head-start over his rivals that meant he could leave out the final race, the Mattoni Ústí nad Labem Half Marathon to focus on the forthcoming World Championships in Doha.

In his first big title win, Rachik even managed to break two European race records. In Karlovy Vary he succeeded at wiping reigning champion Roman Romanenko from the rankings with a performance of 1:02:56, going on to shave 36 seconds off the European race record at the České Budějovice race, finishing there in 1:03:04. He took this stellar quality and hunger for yet another race record with him to Olomouc, though hadn’t factored in the scorching heat and adverse weather conditions, which ultimately prevented him from beating Turkish runner Polat Arikan’s time of 1:02:12.

In his first year participating in the prestigious series, Yassine Rachik amassed an impressive 2 220 points and two best performances included in the overall rankings. He took 1 100 points from each of his first two races in Karlovy Vary and České Budějovice. He then went on to pick up 1 087 points in Olomouc. The only race he decided to give a miss was the Mattoni Ústí nad Labem, Half Marathon, prioritising preparations for the World Championships in Doha.

Roman Romanenko can pride himself on securing second place. With a total score of 2 183 he is 37 points behind the Italian. The fight for bronze, however, was left right until the end. Prior to the Ústí nad Labem race, Paul Pollock was in third place after delivering two high calibre times rewarding him with 2 156 points. The Spanish runner Jaume Leiva Beato, however took advantage of the Irish runner’s absence in North Bohemia and amassed 2 173 points overall.

The overall EuroHeroes Challenge winner in the women’s category emerged as long-distance runner Darya Mykhailova from Ukraine. Despite Moldovan runner Lilia Fisikovici triumphing at the previous three races, Mykhailova was able to close the gap on the scoreboard by delivering a fantastic time of 1:11:36 at the Mattoni Ústí nad Labem Half Marathon. It wasn’t until one kilometre ahead of the finish that it became clear the last few metres were going to be crucial and could completely turn the tables to the detriment of the series leader so far.

Mykhailova ran her first series race in České Budějovice, where she finished in 1:13:56 and picked up 1 105 points. She didn’t run well in Olomouc, though still managed to secure 1 087 points and second place with a time of 1:14:57. She was thus well aware that if she wanted a chance of snatching the top podium spot in the grand finale in Ústí nad Labem, it would be a matter of seconds and she’d better run the race of a lifetime. It paid off. She crossed the finish in 1:11:36 just behind British runner Jess Piasecki, taking home 1 146 points as well as the first EuroHeroes Challenge victory title. In the end a time of 1:12:05 would have sufficed.

The Moldovan athlete was left with nothing, despite managing to keep all her rivals at bay in the previous three races. Holder of two European records at EuroHeroes races, she delivered a start to finish win at the first race of the season – the Mattoni Karlovy Vary Half Marathon. She went on to leave the competition far behind in České Budějovice, maintaining a steady pace throughout and picking up a second win.

Only in the third race did she face serious competition from a new challenger – Great Britain’s Stephanie Twell who remained in the lead for a large part of the race. Fisikovici managed to bring herself back up, close the huge gap between them and race to a winning hat-trick finish. Her race in Ústí nad Labem started out similarly, though this time she was unable to recover from her difficulties. A time of 1:13:29 was all she needed to secure the crown, but in the end she took more than half a minute longer to cross the finish line (1:14:06).

Fisikovici picked up her highest number of points (1 129) in Karlovy Vary, going on to take a further 1 113 in České Budějovice and 1 111 in Olomouc. Her Ústí time rewarded her with 1 102 points. This was not enough for overall victory. And sadly, her difficult race also cost her second place overall, which will now go to Ukrainian runner Olga Skrypak. Her České Budějovice time of 1:14:04 (1 102 points) together with her excellent delivery in Ústí nad Labem taking her to 1:11:41 (1 145 points), pushed her ahead of the Moldovan.

The performances of runners participating in this year’s series were scored using a special system similar to that used in decathlon disciplines. The RunCzech organisers put together an overview with each achieved time awarded a certain number of points. From all the races completed by the athletes, only their two best performances were then used to make up their final score in the overall EuroHeroes Challenge rankings.

The winners of this year’s first ever EuroHeroes challenge were awarded 5 000 Euros in prize money. The second best man and woman took home 3 000 Euros while those finishing third took 1 000 Euros.

Aside from fantastic sporting performances on the courses of the four races, this year’s series also played host to a great many interesting experiences and stories. It also brought to light a number of interesting facts about the races and athletes. Here is a selection of some of the most important of these:

Highlights from the 1st EuroHeroes Challenge: