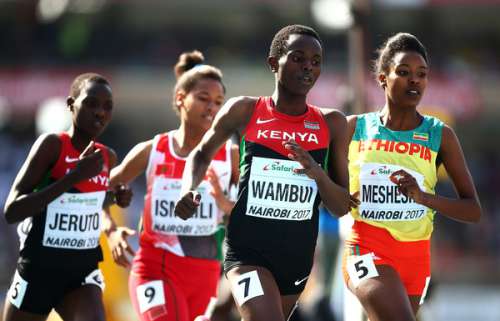 Linda Kageha, who was in the mixed relay team also withdrew from the World championships for refusing to take mandatory testosterone test.

“The IAAF has set tough conditions on gender and doping and we must comply. If an athlete fails to take the tests, they are definitely out of the World championships,” AK Vice President in charge of competitions Paul Mutwii told Reuters.

“Wambui and Kageha declined the test on testosterone levels. They had no choice but to withdraw,” said Mutwii.

The 19-year-old Jackline Wambui won the Kenyan trials last week in Nairobi with a new persona best and 10th fastest time this year in the World of 1:58.79.

The 2013 World Champion Eunice Sum will be the only representative from Kenya in the women's 800m race at the World Championships in Doha which will kick off on September 27.

Last week World 1,500m champion Elijah Manang'oi also pulled out of the Worlds due an ankle injury he picked during training.

Mutwii said that the AK were still waiting for an answer from IAAF Athletes Integrity Unit (AIU) over the fate of Michael Kibet and Daniel Simiyu in men's 5,000m.