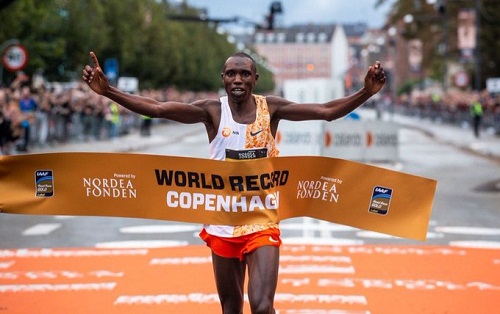 The three time-World half marathon champion shaved 17 seconds of the previous World record set by Abraham Kiptum in Valencia last year in November.

Just before the 11km marker, Kamwowor took the lead increasing the tempo dramatically. The 26-year-old clocked an incredible 13:31 between 10km to 15km. He crossed the 15km marker in 41:03, 11 seconds inside the World record and sub-58-minute pace.

Despite slowing down in the final stages of the race, Kamwowor's maintained his strong running form to stop the clock in 58:01.

In 2014 in Copenhagen Kamworor won his first of three World half marathon titles.

“It is very emotional for me to set this record,” said Kamworor. “And doing it in Copenhagen, where I won my first world title, adds something to it.” Kamworor said.