• Brigid Kosgei Clocks Stunning 64:28 in the Half Marathon at Great North Run 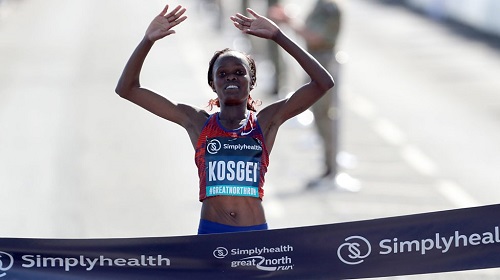 Kenya's Brigid Kosgei clocked an incredibe 64:28 in the half marathon to break Great North Run course record on Sunday, Sept. 8.

Kosgei led a Kenyan clean sweep with Magdalene Masai emerging second after running in 67:36, while her elder sister Linet Masai sealed the podium places in 67:44.

Kosgei's winning time was more than half a minute faster than the official world record of 1:04:51 held by compatriot Joyciline Jepkosgei, which she clocked during the Valencia Half Marathon in 2017. Since the Great North Run isn't record-eligible, so no official World records can be set on it.

New York Marathon champion Mary Keitany, who is also the women’s only world record holder in marathon, came a distant fourth after clocking 67:58.

Great Britain's Mo Farah won record sixth in a row Great North Run with a personal best time. He broke the tape in a new lifetime best of 59:07. Farah finished six seconds ahead of Ethiopian Tamirat Tola in the final mile.

"Things are looking good and I'm happy with the win. Tokyo is definitely on the cards - as an athlete you always want to represent your country." Farah told BBC.