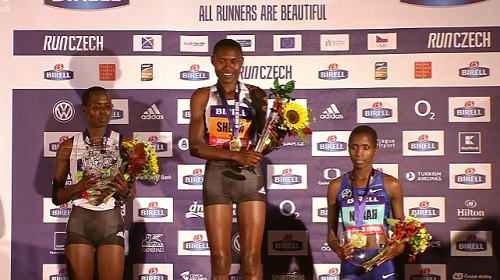 The 24th annual Birell Grand Prix Prague 5&10 km, the IAAF Gold Label race, was truly thrilling and record-breaking! Kenyan Geoffrey Koech set the best time of this season and the fourth best performance ever clocking 27:02. In the women's category, Sheila Chepkirui from Kenya dominated with 29:57. For the first time in history two women managed to run in one race under 30 minutes. The best Czech were Vít Pavlišta (29:50) and Hana Homolková (35:59).

At the first half of the race the runners set the pace of the world record, passing the five kilometer at 13:24, but during the second part they slowed down. At the seventh kilometer only the Kenyans Bravin Kiptoo and the Geoffrey Koech stayed together pushing each other to the finish line. However Koech dominated the race at the last kilometer when he managed to speed up and leave his compatriot Bravin Kiptoo behind.

Koech has distinctly improved his personal record by 15 seconds, performing also the fastest time in 2019 season, thus surpassing Stephen Kissa. In addition, he holds now the fourth best performance ever in history. Matthew Kimeli (0:27:09), the RunCzech Racing Alumni, was the second to finish ahead of Bravin Kiptoo (0:27:12), a member of the RunCzech Racing team. All three men on the podium also became the fastest athletes of the year.

"Of course there is a lot of space for improvement but still I am very happy with my result, ” Koech shared his feelings after the race.

The women shined on the course in Prague again. For the first time ever two of them managed to finish the same race under 30 minutes. Both Sheila Chepkirui and Dorcas Jepchumba pushed to the finish clocking 29:57, though Chepkirui was only a hundredth of second faster dominating the race. Thus Birell Prague Grand Prix holds now the world’s three best ever times in the women’s category. Only Joyciline Jepkosgei was faster setting the world record of 29:43 here in Prague in 2017. Norah Jeruto (30:07) took third place this year and is now the sixth best in the world.

It didn't seem to me as fast as the results are, but the second half of the race was really much harder," said the winner Sheila Chepkirui. "I believe that I can run even faster in the future and I believe it can be in Prague next year," she added.

The winners among Czechs were Vít Pavlišta with his new personal vest of 29:50 and a young athlete Hana Homolková (35:59).

9748 runners joined the Birell Prague Grand Prix 2019, with 2621 taking part in the adidas Women’s Race 5 km which started 1,5 hour before the 10K race. The next races of the RunCzech season 2019 are Mattoni Ústí nad Labem Half Marathon (21st September), Mattoni Liberec Nature Run (5th October) and the Sorrento Positano (27 km and 54 km) held on 1st of December in the South of Italy.
Live Stream