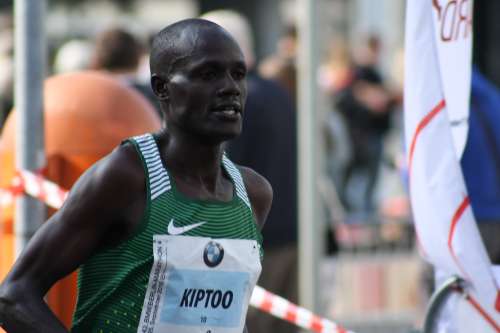 The man who last year set the first world record in the history of the oldest German city marathon will be making a return to those same familiar roads: Mark Kiptoo is to run the 38th edition of the Mainova Frankfurt Marathon on October 27. The Kenyan ran 2:07:50 twelve months ago to take the world record for a masters or veteran runner under 2:08 for the first time when he finished sixth in Frankfurt. All the signs are that the 43-year-old is capable of a further improvement on the world record as his aim is to win the Mainova Frankfurt Marathon.

The organisers of the Mainova Frankfurt Marathon are expecting up to 14,000 runners to take part. Places are still available for the race, which has IAAF Gold Label status, the highest category awarded for road racing. Further details are available at: www.frankfurt-marathon.com

“We are delighted that Mark Kiptoo has decided to run the Mainova Frankfurt Marathon again – and especially because this time he returns as a world record holder, achieved in Frankfurt. That says a lot for our organization because Mark knows that he will have the best possible conditions here. Hopefully he can further improve his masters world record on October 27,” said the Race Director Jo Schindler.

Despite his 43 years, Mark Kiptoo is still running at a very high level. That this is possible is probably because the Kenyan came late to the marathon and hasn’t had quite as many years of highly demanding training in his legs for the event. At the relatively advanced age of 37 he made his debut at the distance in Frankfurt – where else? – and he finished second, missing victory by just one second with his time of 2:06:15.

Frankfurt has been a fertile hunting ground for Kiptoo in the past. In 2014 he returned to win the race in 2:06:49, followed that with the world record for the over 40 age group of masters or veteran runners. Three of his five best marathon times have been run in the city. His lifetime best is 2:06:00, achieved in the Dutch city of Eindhoven in 2015.

„I am very excited to be heading back to Mainova Frankfurt Marathon this year. I have enjoyed good experiences in the past, finishing second in 2013, winning in 2014 and last year of course breaking the world masters record,“ said Mark Kiptoo and added: „This year my aim will be to challenge to win the race. I believe if I win the race then I probably break the record again. My preparations are going on well and God willing I see another successful day in Frankfurt ahead.“

Two Kenyans who impressed at the Mainova Frankfurt Marathon last year and finished ahead of Mark Kiptoo are also making a return: Amos Mitei was fourth with 2:07:28 in 2018 and Kenneth Keter took fifth in 2:07:34. Bernard Kipyego is added to the Kenyan contingent and has similar ability, having won the 2015 Amsterdam Marathon in 2:06:19.

Despite the strong Kenyan presence, an Ethiopian could well emerge as leader of the pack on October 27. Fikre Bekele, no relation to the long distance multiple Olympic gold medallist Kenenisa, ran 2:06:27 to finish fourth in Seoul this spring, a traditionally high class event. This was after suffering problems in his first two marathons last year, where he endured to finish in 2:20 and 2:17 in India and Spain respectively.