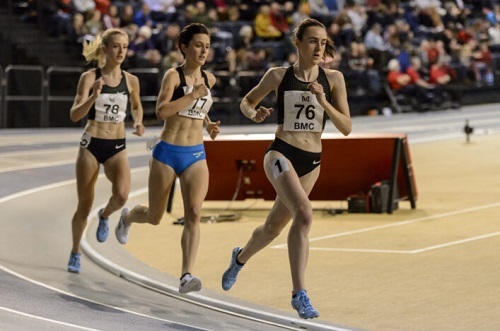 Double European Champion Laura Muir opened her 2019 indoor campaign with a stunning 5000m while Gabriela Stafford obliterated the Canadian record at the GAA Miler Meet in Glasgow on Saturday (5).

Muir, paced by the 27-year-old Rio Olympian in Triathlon Beth Potter through 3000m in 9:02, clocked an impressive 14:52.02 FTW as her training partner Gabriela Stafford destroyed the Canadian record by nearly 30 seconds, finishing in second in 14:57.45.

“I’m really happy,” said Muir. “I think I did the last 2km more or less identically to the time when I ran the (5000m) record because we went through 3000m three seconds slower (than when the record was broken). 2017 was when I was running lots of European records so the fact that I’m in very similar shape to then is really good.”

“We are part of the same sports agency,” said Stafford .“She is amazing and you meet lots of different athletes of different temperaments. Sometimes certain athletes aren’t super welcoming of having someone else training with them in the same event. The fact she has been so welcoming to me has been great. She has a great temperament and is a really kind person.” She added.