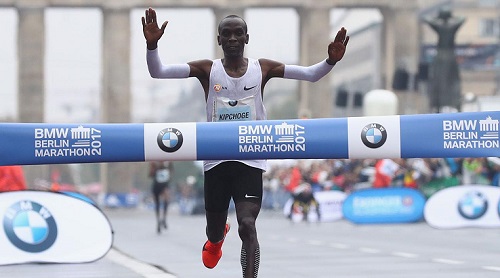 Eliud Kipchoge crowned the 45th edition of the BMW BERLIN-MARATHON with a fantastic world record in 2:01:39. The 33-year-old Kenyan led from the start, following his own schedule and was never challenged for the lead. When he crossed the finish line he had obliterated the world record of 2:02:57, set by his compatriot Dennis Kimetto four years ago in Berlin, taking the huge margin of one minute, 18 seconds off that time. It is the biggest advance in the men’s marathon world record for over 50 years since the Australian Derek Clayton ran 2:09:36 in Fukuoka in 1967, slicing two-and-a-half minutes from the record. It is also the eleventh world record in the history of the BMW BERLIN-MARATHON.

The Kenyan Amos Kipruto took advantage of good weather conditions to give himself a 26th birthday present, finishing second with 2:06:23. Wilson Kipsang of Kenya finished third in 2:06:48 while Shogo Nakamura of Japan took fourth in 2:08:16.

History was also made in the women’s race as Gladys Cherono overturned pre-race expectations by breaking the course record to run 2:18:11, a personal best and the fastest women’s time in the world this year. Cherono won her third BMW BERLIN-MARATHON title and went to number four on the women’s all-time list. For the first time in marathon history three women broke 2:19 in one race as Ruti Aga finished second in 2:18:34 and her fellow Ethiopian Tirunesh Dibaba took third in 2:18:55, despite having been expected to lead the challenge for a super-fast women’s time.

The combined winning times in this 45th edition of the BMW BERLIN-MARATHON made the race the fastest ever over the distance. The aggregate of Kipchoge’s and Cherono’s winning performances came to 4:21:08. Before today this prestigious position was held by the London Marathon with their combined result of 4:22:48 from this year’s race in April.

The BMW BERLIN-MARATHON also set a record for entries of 44,389 runners from 133 countries.

Eliud Kipchoge’s triumph in Berlin settled the argument as to who is the best marathon runner in history. The Kenyan was in the lead group from the start and his only companions were three pacemakers rather than outright rivals. The latter were unable to raise a challenge to his ferocious pace and even his pacemakers appeared to struggle at times. The reigning Olympic Marathon champion went through halfway in 61:06 and by that time had just one of a original trio of pacemakers with him. Josephat Boit’s involvement lasted until 25 kilometres which left Kipchoge the remaining 17 km to run alone, a stark contrast to the manner of other world records set in Berlin.

Remarkably this outstanding athlete increased the pace once the last pacemaker had departed, completing the second half in a “negative split” of 60:33. That is one second faster than the German half marathon record. “It was my aim to smash the world record and I felt confident before the race. I’ve now run 2:04, 2:03 and now 2:01, who knows what the future will bring!” reflected Eliud Kipchoge who missed breaking the world record in Berlin in 2015 and last year by bad luck more than anything else. At the first attempt he had problems with his shoe insoles and in 2017 heavy rain made conditions difficult. Nonetheless he won both races so completed a hat-trick with this latest triumph in the BMW BERLIN-MARATHON. “I’ll definitely return to Berlin. Berlin for me is eternal,” promised Kipchoge who has now won all but one of his twelve marathons.

Wilson Kipsang, who himself broke the world record here in 2013, inflicting what has so far been the only defeat in Kipchoge’s marathon career, was full of praise for the world record breaker: “I have to say what Eliud achieved today is incredible,” said Kipsang, who didn’t have the best of days. “I was in good form but the pace up front today was too fast. I believe I can still run 2:04 or 2:05.”

In the women’s race Tirunesh Dibaba didn’t set off as fast as had been expected. A big leading group formed which included herself but also fellow Ethiopians Ruti Aga, Helen Tola and the Kenyan duo of Gladys Cherono and Edna Kiplagat. Dibaba, despite being the fastest on the start list with her national record of 2:17:56, appeared to have problems in finding her water bottle at the drink stations. Later she was troubled by cramp. After reaching halfway in 69:03 with a lead of seven seconds, she was overtaken shortly before 25km by first Cherono and then Aga. “I’m disappointed, I thought I would run faster than this,” explained Dibaba.

All three – Cherono, Aga and Dibaba – maintained a pace unprecedented in any previous women’s race in Berlin. They kept it going to the finish as three women broke 2:19 for the first time here. “When I attacked and overtook Tirunesh, I felt confident I would win,” said Gladys Cherono, who broke the course record which had stood for 13 years when Japan’s Olympic champion Mizuki Noguchi ran 2:19:12 in 2005. The Kenyan’s hat-trick elevated her into distinguished company as she joined those who have won the BMW BERLIN-MARATHON title three times: Renata Kokowska of Poland, Berlin’s very own Uta Pippig and the Ethiopian Aberu Kebede.