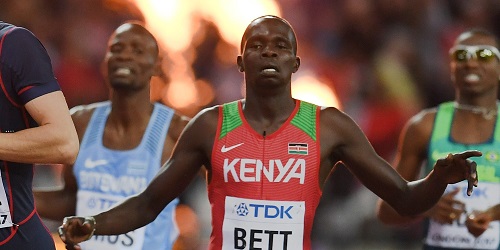 Earlier this month 20-year-old Bett was provisionally suspended after he refused to provide drug test on August 15.

“We had submitted defense for the case of ‘refusing or failing to submit to sample collection’ by Friday’s deadline. But last night, we received another notification about the new case,” The Athletics Kenya executive committee member Barnabas Korir said.

“We have kicked off due process, accorded to every athlete as per the rules set by AIU. If the second test confirms the first one, then the athlete will have to face the consequences,” he added.

If A sample returns positive, Bett becomes the fourth Kenyan athlete to be suspended for doping in less than a month. Athens Marathon champion Samuel Kalalei, distance runner Lucy Wangui Kabuu and sprinter Boniface Mweresa have been charged with anti-doping rule violations.