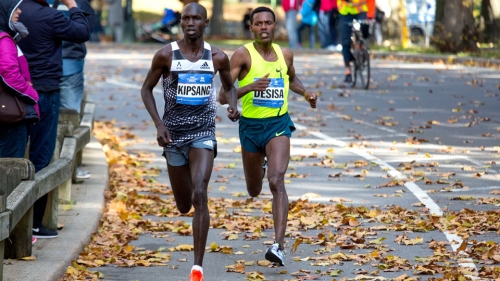 World's one the most famous road races, theTCS New York City Marathon 2017, will kick off on Sunday, November 5.

In the women's race  Kenya's Mary Keitany, a 2:17:01 runner, will try to win the New York City Marathon for the fourth time. If she wins the race she will become the second most successful women in New York Marathon. The record women is Norwegian marathoner Grete Waitz who the NYC marathon 9-times.

The women's elite field also includes this year's Boston marathon winner Edna Kiplagat (2:19:50PB), the 2015 World Champion and Olympic bronze medalist Mare Dibaba (2:19:52PB), Buzunesh Deba a 2011 winner in Boston and runner up in New York in 2011 and 2013 and  the top American marathoner Shalane Flanagan who came 20 seconds from winning NY in 2010 in her debut and placed 6th at Rio Olympics.

How to watch New York Marathon Online and on TV?

In the New York tri-state area: Watch the broadcast live on WABC-TV, Channel 7 from 9:00 a.m. to 2:00 p.m. In the United States watch on ESPN2 and via WatchESPN on computers, tablets, smartphones ect.

More info and links to live stream you will find here.