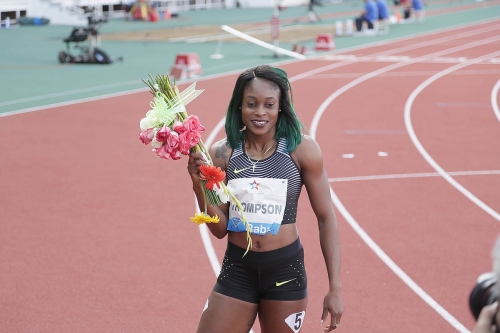 Elaine Thompson took another Diamond League victory as she crossed the line first in the 100m in Rabat  on Sunday, July 16.

Thompson was challenged by Ta Lou for 80m, but the the 25-year-old Jamaican eased away from the Cott Divuer sprinter in final meters to secure her 4th Diamond League victory in 2017.

In the women's 400m race, Olympic champion Shaunie Miller-Uibo of Bahamas stormed to a victory in 49.80sec, while the Olympic  800m champion Caster Semenya of South Africa finished in 7th in 51.53.

In the men's 3000m steeple chase, Soufiane Elbakkali in front of his home crowed defeated top Kenyan steeplers with a new personal best of 8:05.12.

Defending Olympic and World champion Caterine Ibarguen of Colombia with a leap of 14.51m won the women's triple jump contest.