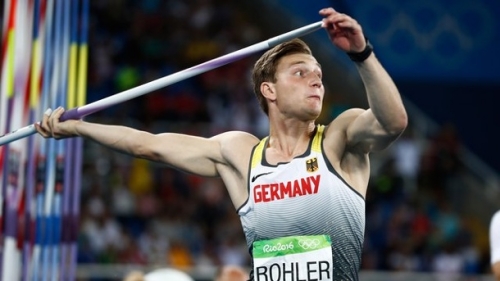 Germany's Thomas Rohler produced history's 2nd farthest throw in the men's javelin with 93.90m to win the opening stage of the 2017 Diamond League series in Doha, Qatar on Friday, May 5.

Rohler opened his javelin series with 82.94m throw. The Olympic Champion kept improving his results by throwing 85.52m and 88.12m in round 2 and 3 respectively. Finally, in round four Rohler unleashed a monster throw of 93.90m to write his name in the record books.

"I did not see that coming. To be in close company with someone like Jan Zelezny is really special." Said Rohler.

In the women's 100m hurdles strong headwinds prevented World record holder Kendra Harrison post fast time as she confidently broke the tape in 12.59 seconds. Her time was 0.03sec outside of her own world leading mark.

In a much anticipated women's 800m race Olympic champion Caster Semanya destroyed the field by setting a new meeting record with 1:56.61. Genzebe Diaba finished in a disappointing 5th place in 1:59.37.

Kenyan men continued their dominance in middle distance events as Ronald Kwemoi took the 3000m in a big PB and world leading time of 7:28.73.

Local athlete Abderahaman Samba took a surprise victory in the men's 400m hurdles with a new PB of 48.44.

A local hero Essa Mutaz Barshim cleared a world leading height of 2.36m for the win.

Ekaterinin Stfanidi of Greece went over 4.80m to claim vicotry in the women's pole vault.