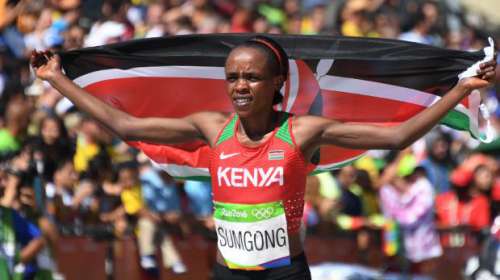 The track and field governing body said in a statement that Sumgong's A doping sample tested while she was training in Kenya.

“The IAAF can confirm that an anti-doping rule violation case concerning Jemima Sumgong (Kenya) has commenced this week." the IAAF said in a statement.

"The athlete tested positive for EPO (Erythropoietin) following a no-notice test conducted by the IAAF in Kenya.

"This was part of an enhanced IAAF out-of-competition testing programme dedicated to elite marathon runners which is supported by the Abbott World Marathon Majors group."

Last year the 32-year-old Sumgong took a surprise win at London marathon and became the first Kenyan to win women's marathon at any Olympic games.

Sumgong is the second big marathoner from Kenyan after Rita Yeptoo to test positive for doping.