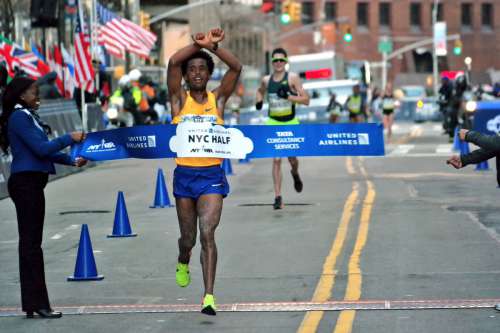 The Ethiopian marathoner, who claimed silver in Rio Olympics, Lilesa took the NYC  men's half marathon title in 60:04 beating Great Britain's surprise runner Callum Hawkins, who led most of the race, by 4 seconds. Ethiopia's Teshome Mekonen took the third place in 60:28 minutes.

Molly Huddle, the american record holder in 10000m, took  the women's NYC half marathon honors with a time of 68:19 minutes. Emily Sisson of the United States came in second clocking massive personal best time of 68:21, while Diane Nukuri (BDI) closed the top 3 with a time of 69:13.

The two-time world champion in marathon Edna Kiplagat of Kenya finished the NYC half in a disappointing 4th place in 69:37.