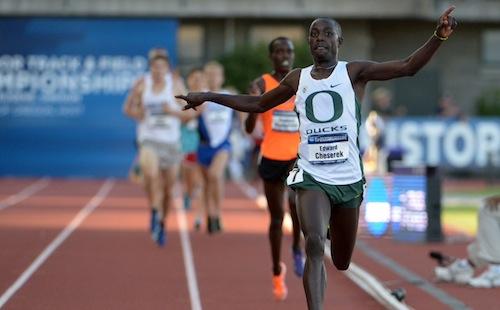 Kenya's Edward Cheserek powered to a victory in the men's 5000m at the 2017 NCAA Indoor Championships in College Station, Texas on Saturday, (March 10).

On Saturday night the 23-year-old Kenyan will return to track compete in the mile and 3000m finals.

In the women's shot put, Raven Saunders' achieved a new world lead and new NCAA record of 19.56m for the win.

Kendell Williams won the women's pentathlon with 4682 points and became the first athlete in NCAA history to win all four indoor titles.

Other highlights on day one include Texas A&M sprinter Fred Kerley's 45.10 in 400m heats and Christian Coleman's of the University of Tennessee 6.50m in the men's 60m heats.

There was quite drama in the women's 200m heats as University of Oregon sprinter Deajah Stevens was disqualified after setting a new USA record 22.28 seconds. Stevens stepped over the line on the turn and was later disqualified.