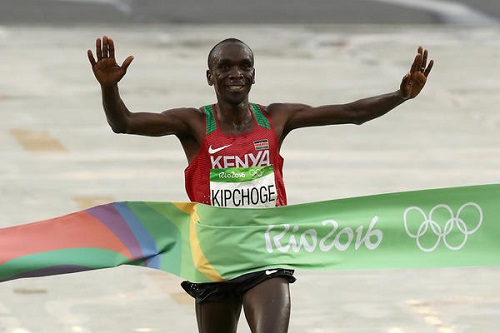 Nike has put together a team of world's top long distance runners with one crazy goal to brake the 2:00:00 barrier in the marathon next year.

In order the achieve the ambitious plan Nike chose Olympic Champion Eliud Kipchoge of Kenya, Lelisa Desisa of Ethiopia and multiple half marathon world champion Zersenay Tadese of Eritrea. All three athletes who are guided by top sports scientists, coaches and sports psychologists have already started their training for sub two-hour marathon.

The current world record stands at 2:02:57 set by Kenya's Dennis Kimetto two year ago in Berlin. When Kimetto broke the world marathon record he averaged 2:54.8 per kilometer. To brake the two-hour brier the athletes will have to average 2 minutes and 50 seconds per kilometer.

The exact location and date is not known yet, however according to Wall Street Journal article  the possible course where the athletes will attempt to run 1:59:59 or fastest may not be eligible for an official world record.