• Frankfurt's Rise to become one of the World's Fastest Marathons 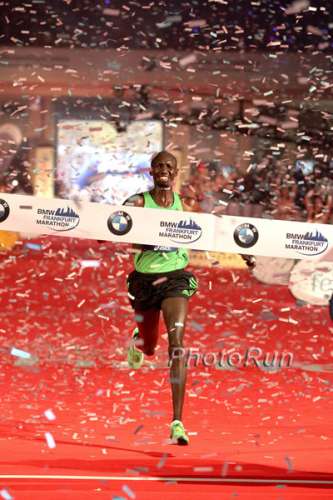 bWhen the Frankfurt Marathon celebrated its 25th edition a decade ago the race had already come a long way from its beginnings. But nobody could have foreseen that ten years later the event would have firmly established itself as one of the fastest marathons in the world. The current course record of 2:03:42 by Wilson Kipsang makes Frankfurt the fourth fastest marathon in the world behind Berlin, London and Boston’s course, although the latter does not meet the requirements for official world record status. Germany’s number two marathon behind Berlin has also made good progress in terms of a mass event. 15,500 runners have entered Sunday’s 35th edition of the Mainova Frankfurt Marathon, which is an IAAF Gold Label Road Race. Additional late entries might well create a record entry of more than 16,000 athletes.   The story of the Frankfurt Marathon began back in 1981, a year which marked the beginning of the first three major city races in Germany. Two of them took place in May: The 25 k in Berlin and the Frankfurt Marathon. In September the Berlin Marathon celebrated its first city edition – having been staged next to a forest for its first seven years from 1974. Frankfurt had no such forerunner. The very first marathon was run right through the heart of the city and proved a big challenge for the organisers but they had the support of a major German chemical company: the Frankfurt-based Hoechst concern became the main sponsor of the event.   The company not only became the title sponsor, bringing with it a welcome amount of financial support, they also provided staff and goods with Wolfram Bleul becoming the first race director. On 17th May 1981 the Czech running legend Emil Zatopek was the official starter for the first marathon with the start line right next to a Hoechst factory. The race had 3,169 entries and 2,588 finishers. Around 150,000 spectators lined the course to cheer the runners. The winner was Sweden’s Kjell-Erik Stahl who could hardly let a weekend go by without running a marathon at that time and he ran a fine 2:13:20.   In 1982 entries rose to 5,529 and the race also progressed regarding winning times in the years that followed. While Germany’s Charlotte Teske produced the first women’s sub 2:30 performance of 2:28:32 in 1983 (a national record) it was the men’s race in 1984 that caught international attention as Ethiopia’s world-class runner Dereje Nedi clocked 2:11:18. It was the fastest time on German soil at the time, improving the Olympic winning time of the American Frank Shorter in Munich 1972 (2:12:19).   However the withdrawal of Hoechst as the title sponsor led to the cancellation of the Frankfurt Marathon in 1986. Recovery was not long in coming as a new organisation was formed with the city’s government becoming much more involved for the long term. In addition, the sixth edition of the Frankfurt Marathon in 1987 had a new course.   The race had a number of national winners in the 90s – among them Katrin Dörre-Heinig, Luminita Zaituc and Herbert Steffny – but compared to the marathons in Berlin or Hamburg it had lost ground. While Berlin produced sensational results and even world records during those years, Frankfurt was still awaiting its first sub 2:10. After a great start in the early 1980s, Frankfurt appeared to have lost momentum.   Frankfurt’s city council then took charge and this proved the starting point for a new era. In 2002 a new race director, Jo Schindler, was appointed.   He had successfully developed a marathon in his hometown, Regensburg (Bavaria), and was eager for the new challenge. Schindler had the vision of transforming the Frankfurt Marathon into a world-class event – an ambition which looked highly unlikely at the time. The new Race Director used local knowledge but also brought in expertise from elsewhere.   One of the first major changes was the repositioning of the finish. Since 2003 Frankfurt’s finish line is indoors, in the “Festhalle.” “We had to offer something really emotional, because the marathon is an emotional event,” says Schindler, who also improved the content of the goody bags significantly. Aspects like the pasta party or hot water showers in the finish area were reviewed and improved. The changes and investments paid off. “We have reached entry figures of which we could only have dreamt of when we took over in 2002,” says Jo Schindler.   For the 2003 race Jo Schindler brought in a new elite athletes’ coordinator: Christoph Kopp, who had originally developed the Berlin Marathon into a world-class race and who had already helped Schindler in Regensburg. He had an immediate and positive effect. With 2:10 finally being broken in 2003 thanks to Kenya’s Boaz Kimaiyo’s 2:09:28. Seven course records in the following eight years catapulted the race into a position among the world’s fastest marathons.   The absolute highlight came five years ago when Wilson Kipsang crowned the 30th edition with a course record of 2:03:42. At that time the Kenyan was only four seconds away from the world record. “The Frankfurt Marathon 2011 was one of the most important races of my career. It was my first go at the world record. And although I missed it I did reach another level. The friendliness of the people and the indoor finish were outstanding,” remembers Wilson Kipsang.   The women’s course record was also improved significantly in the past ten years. In 2012 Ethiopia’s Meselech Melkamu clocked a world-class 2:21:01. On Sunday the top women contenders will try to go for this record. Development of course records MEN 2:03:42 Wilson Kipsang KEN 2011  2:04:57 Wilson Kipsang KEN 2010  2:06:14 Gilbert Kirwa KEN 2009  2:07:21 Robert Kiprono Cheruiyot KEN 2008  2:07:58 Wilfred Kigen KEN 2007  2:08:29 Wilfred Kigen KEN 2005  2:09:10 Boaz Kimaiyo KEN 2004  2:09:28 Boaz Kimaiyo KEN 2003  2:10:40 Henry Cherono KEN 2000  2:10:59 Michael Fietz GER 1997  2:11:18 Dereje Nedi ETH 1984  2:12:41 Mehmet Altun TUR 1983  2:12:54 Delfim Moreira POR 1982  2:13:20 Kjell-Erik Stahl SWE 1981  WOMEN 2:21:01 Meselech Melkamu ETH 2012  2:21:59 Mamitu Daska ETH 2011  2:23:25 Caroline Kilel KEN 2010  2:25:12 Alevtina Biktimirova RUS 2005  2:26:01 Luminita Zaituc GER 2001  2:26:48 Katrin Dörre-Heinig GER 1997  2:27:44 Franziska Moser SUI 1994  2:28:32 Charlotte Teske GER 1983  2:36:38 Heidi Hutterer GER 1982  2:47:18 Doris Schlosser GER 1981  More Information and online entry is available at: www.frankfurt-marathon.com   Photo credit: www.photorun.net
Latest news