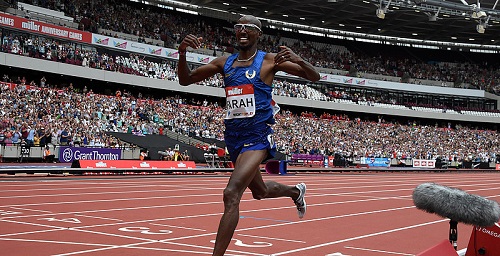 "2017 will probably be my last year competing on the track so I’m really looking forward to running in front of my home fans in London," Farah told British Athletics on Monday.

At the Rio Olympics,  Farah successfully defended his 5000m and 10000m title to become the most decorated British track and field athlete.

Müller Anniversary Games in London's Olympic stadium will be also the last track competition for Farah on British soil before the 2017 World Championships where he aims to defend his 5000m and 10000m titles.

"The Olympic Stadium holds great memories for me and with the World Championships returning next year it will be great to run there in July at the Anniversary Games." Farah said.

“With tickets for Farah’s events at the 2017 World Championships having sold out, this is the last chance for the British public to see Mo compete at the scene of his magnificent double Olympic gold triumph.” Niels de Vos, Chief Executive of UK Athletics, said.

“The Muller Anniversary Games is now established as the best grand prix meeting in the world and a great chance for the athletics fans to see all the top athletes compete.” Niels de Vos told British Athletics on Monday.