• Lavillenie on his way to 7th Diamond League title 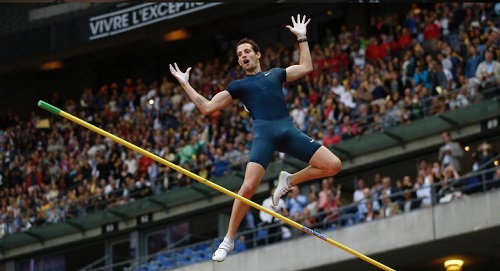 With two finals in Zurich on September 1 and then in Brussels on September 9, the 2016 Diamond League circuit will finally be over.

Diamond League  organizers improved the point system for this year by allowing top 6 athletes to score. Also points in the Diamond league finals are doubled. The new change allows more athletes to participate for the win in these series which consist of 14 stages.

The winner in each event will take home Diamond Trophy, USD40,000$ cash prize and a wild card to the next  IAAF World Championships.  In order to receive the Diamond League title and prizes, leading athletes must action in one of the two the finals.

Seven athletes just by showing up in one of the finals will claim Diamond League trophy, while many others will have to battle to win the main prize.

Men's Pole Vault: the new point system has not stopped the pole vault world record holder,  Renaud Lavillenie, to win his 7th straight Diamond Trophy as he is in the lead with 52 points. The closest  athlete to Lavillenie with 30 points is USA's Sam Kendricks. This means that  neither Kendricks nor anyone else can beat Lavillenie for the trophy even if the Frenchman finishes last in Zurich on Thursday.  As of today Lavillenie is the only man to win all the Diamond League Trophies since these series started in 2010.

Women's 100m hurdles: USA's Kendra Harrison who failed to qualify for Rio Olympics at USA trials but then broke the 100m hurdles world record leads this event with 50 points. Meanwhile Brianna Rollins is in second with 28 points. Like Lavillenie, Harrison just needs to participate in the final to claim her first Diamond Trophy.

Women's Long Jump: Rio Olympics bronze medallist Ivana Spanovic is in the shape of her her life as she is the lone leader with 56 points. There is nothing anyone can do to stop the 26-year-old to become first Serbian to win the Diamond League trophy.

Women's Triple Jump: With 56 points the women's triple jump "power house" Caterina Ibarguen of Colombian will secure her another Diamond League trophy if she only attempts one jump in the final in Brussels on September 9. The 2012 Diamond Race winner Olga Rypakova of Kazakhstan is second in the triple jump lists with 27 points.

Women's Shot Put: New Zealand's Valerie Adams, who was beaten into second place in a dramatic shot put final in Rio Olympics,  is on her way to win her 4th Diamond League Trophy. She is leading the race with 46 points while Tia Brooks of the United States sits in the second place with 25 points.

Women's Discus Throw: Reigning Olympic and World champion Sandra Perkovic is the only female athlete this year that has not been defeated in Diamond League circuit. If all goes well she will win her 5th consecutive Diamond Trophy .

Men's 3000m Steeple: Rio Olympics gold medallist Conseslus Kipruto of Kenya will have to wait until September 9 to add to his honors his first Diamond League title. The 21-year-old Kipruto has won all five Diamond League steeple races this year.