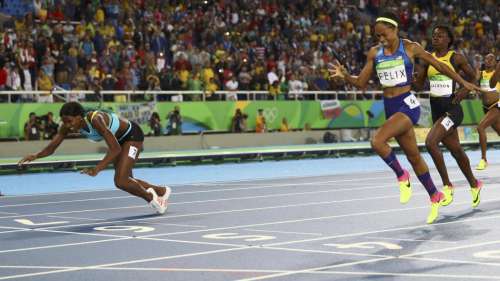 Coming out of the final bend the 2015 world silver medalist, Miller, had a lead Meanwhile Felix was closing the gap very strong as the finish line approached. When Miller realized she was about to lose her gold she made a leap of her and dove across the line to beat Felix. Miller clocked a lifetime best of 49.51 seconds just 0.07 seconds ahead of American.  Meanwhile Jamaica's Shericka Jackson took bronze in 49.85 seconds.

"I don't know what happened. My mind just went blank,"

"The only thing I was thinking was the gold medal, and the next thing I know, I was on the ground." Miller said.

If Felix won the 400m she would become the first women in history to win 5 Olympic gold medals. She still has a chance to write her name in history books as she is preparing to run 4x400m relay where Americans are the favourites.