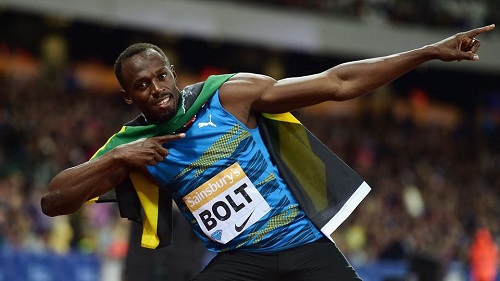 The fastest man on the planet, Usain Bolt, cruised to a very comfortable 200m victory on Day 1 at the Diamond League meet in London on Friday.

Bolt, who suffered a grade one hamstring injury two weeks ago at the Jamaican Championships, running very conservatively took the 200m in 19.89 seconds ahead of Panama's sprinter Alonso Edwards  and Great Britain's Adam Gemili. The London was the last competition for Bolt before Rio Olympics where he will try to win 100m, 200m, and 4x100m.

"I'm feeling good and happy I could run and finish the race without any injuries." Bolt said after the race

"I tried to hold my form. I'm not fully in shape, I need more work but I will be fine," he added.

Scotland's Laura Muir in a dominant run clocked 3:57.49 and  took down the 12-year-old Kelly Holm's British 1500m record. Muir not only set a new British record but also a new Diamond League record.

Shaunae Miller of the Bahamas surprised everyone by taking the women's 400m in a new world lead of  49.55seconds.

In the men's 800m  Frenchman Pierre-Ambroise Bosse showed a very solid form after he beat a talent stacked men's 800m field in a new season's best time of 1:43.88.

USA's Dalilah Muhammad prevailed in the women's 400m hurdles clocking  53.90 seconds ahead of Sara Slott Petersen of Denmark (54.33) and Wenda Nel of South Africa  who clocked 54.47.

Renaud Lavillenie won the pole vault contest with 5.90m as  Christian Taylor of the United States leaped 17.78m for the win in the triple jump.