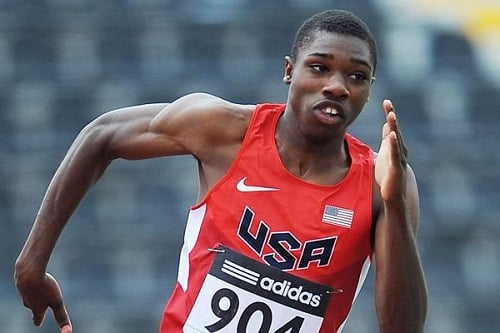 In a dramatic finish, the fastest teenage sprinter in 2016 Noah Lyles clocked 10.17 seconds to win the first gold medal for the United States at these championships.

Jamaican Raheem Chambers, who led the race until 70m,  was passed passed by 5 sprinters in final strides and finished in 6th place in 10.30 seconds.

Just 8 days ago Lyles almost qualified for the Rio Olympics after he finished in 4th place in the 200m final at the USA track and field trials in Eugene.

Poland's Klaudia Maruszewska  topped the women's javelin final with a personal best toss of 57.59m in her opening round ver South African Jo-Ane Van Dyk, who threw 57.32m PB in her 3rd attempt. Qualification leader Turkey's Eda Tugsuz concluded the podium with a mark of 56.71m.

In the men's long jump Cuba's Mykel Masso was the only man to reach 8m mark after he leaped 8.00m into -1.8m/s headwind in round 2 to secure win and first medal for his country in Bydgoszcz. Miltiadis Tentoglou of Greece with 7.91m took silver, while Darcy Roper of Australia claimed bronze with a leap of 7.88m.

After two days Germany is leading the medal table with 2 golds and 1 bronze followed by Poland with 2 gold medals and China with 1 gold and 1 silver.