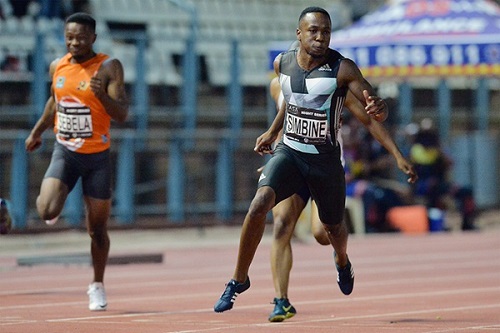 Simbine, who won the race in 8.98 seconds beat into second  Jamaican sprint star Asafa Powell (9.92). The South African shaved 0.07 from his own national record he set this year in April.

The 22-year-old Simbine was not done yet as he returned to track about 30 minutes later to win the 200m in 20.16 seconds ahead of American Isiah Young.

The 2-time Olympic and World Champion David Rudisha of Kenya clocked  a world leading 1:43.35 to claim a confident victory in the men's 800m. Second and third position in the men's 800m was also taken by Kenyan runners as Jonathan Kitilit (1;44.16) and Nicholas Kipkoech (1:44.90) finished 2nd and 3rd respectively.

Elsewhere on the track; Bahama's  2007 world champion Donald Thomas cleared massive 2.37m  to set a new personal and 2016 world #4 . His previous best mark was 2.33m he had cleared on several occasions over the past year.

Grenada's Olympic champion Kirani James returned to competition after a 6 week break to win the men's 400m clocking 44.60m seconds, while Jamaica's Veronica Campbell Brown stormed to a victory in the women's 200m in 22.52  seconds.