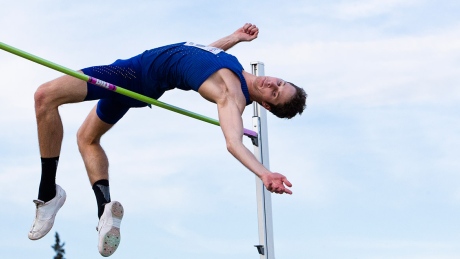 Canada's Derek Drouin left a strong message to his opponents before Rio Olympics after he cleared massive season's best of 2.38m to win the international high jump contest in Eberstadt, Germany on Sunday.

After a disappointing 2.27m performance and 7th place finish in Monaco two days ago, the 2015 world champion Drouin bounced back by clearing big season's best of 2.38m and to beat Essa Mutaz Barshim, the 2014 world indoor champion of Qatar, who cleared 2.34m.  Drouin's 2.38m positions him in top 3 in the world this year. Qatar's Essa Mutaz Barshim tops the world season's list  with 2.40m, while Italy's Gianmarco Tamberi is in 2nd position with 2.39m. There is a big chance that Tamberi might not be able to continue his season anymore as he  severely injured his ankle while attempting 2.41m in Monaco on Friday.

With her 2.00m on in Eberstadt Jungfleisch moved to #2 position in world seasons lists.  USA's  Chaunte Lowe is leading women's high jump with 2.01m.