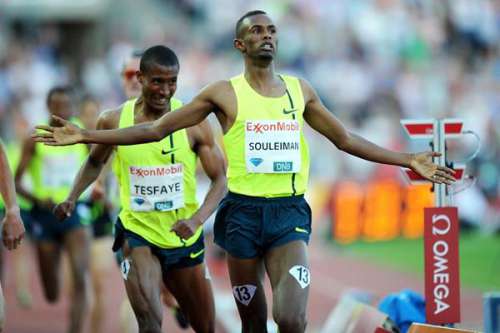 Ayanleh Souleiman, The 2014 world indoor champion, of Djibouti clocked his season's best of 3:31.68 at the annual KBC Night of Athletics meet in Heusden-Zolder on Saturday, July 16.

In his first 1500m race outdoors in 2016, the 23-year-old Souleman clocked the 5th fastest time this year in the world of 3:31.68. The world junior silver and bronze medalist Hillary Ngetich of Kenya clocked a new personal best of 3:32.97 to take second while his countryman the 19-year-old Gilbert Kwemoi shaved almost 7 seconds from his previous personal best to take third in 3:33.71.

Meanwhile the women's 1500m race was won by Betlhem Desalegn of the United Arab Emirates, the 4-time Asian champion, in 4:05.86 just 0.12 seconds ahead of Great Britain's Charlene Thomas and Norway's Ingvill Makestad who crossed the line third in 4:06.03.