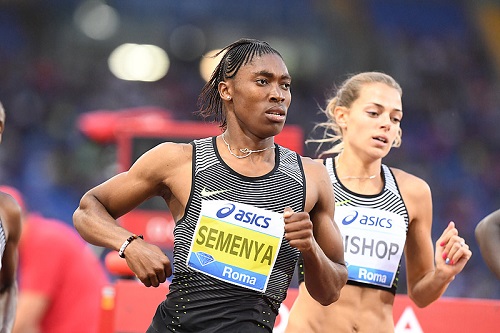 The former world champion Caster Semenya of South Africa crushed the women's 800m field clocking a new national record time of 1:55.33.  World indoor champion Francine Niyonsaba crossed the line seconds in a new Burundi national record of 1:56.92, while Kenya's Eunice Sum posted season's best of 1:57.49 to  take third.  Margaret Wambui after finishing in 4th behind Sum  in a new personal best of 1:57.52 was disqualified.  Semenya,  who clocked 50.74 in 400m at SA national championships and 4:01.99 in 1500m at African championships last month, confirmed she will attempt the 400m/800m double at Rio Olympics.

South Africa's Wayde van Niekerk took the men's 400m in 44.13 followed by Machel Cedenio of Trinidad who posted his lifetime best of 44.34 and Grenada's Bralon Taplin 44.38.

Ronald Kwemoi produced a major upset in the men's 1500m as he managed to beat  Asbel Kiprop, Mo Farah and Taoufik Makhloufi in the men's 1500m. The 3-time world champions Asbel Kiprop was paced through 800m in very fast 1:50.  However when he was reaching 1000m marker it was clear he will not be the winner as Morocco's Abdelaati took the lead 450m to go. Coming out of the final bend several men had a chance to win, but Kwemoi, who took third at Kenyan trials, stormed to a victory in a new season's best of 3:30.49. Second place took  Elijah Monogoi in 3:31.19 as the Olympic champion Taoufik Makhloufi was third in 3:31.35. Double Olympic champion Mo Farah finished in 4th, while meet record holder Kiprop faded to 6th place.