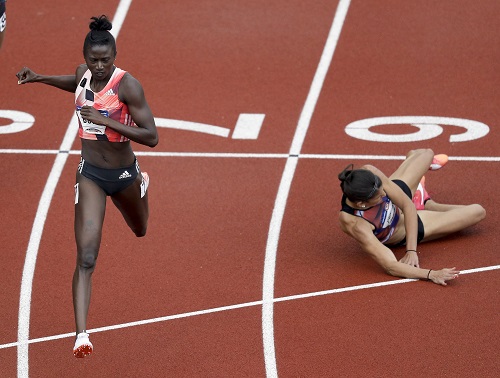 Tori Bowie will run the sprint double at Rio Olympics after she claimed a confident victory in the 200m final, while Dalilah Muhammad stormed to victory in the  women's 400m hurdles final in a massive world lead of 52.88 seconds on Sunday at USA Track and Field Olympic trials.

World 100m bronze medalist,who clocked a big PB of  10.78 seconds to win  100m one week earlier bagged another US title by winning the 200m final in 22.25 seconds. Deajah Stevens and Jenna Prandini who finished second and third will join Bowie in Rio Olympics.   Allyson Felix who won the  400m US title finished in 4th place in the 200m final.

Dalilah Muhammad powered to victory in the women's 400m hurdles final clocking a new world lead and personal best  of  52.88 seconds ahead of Ashley Spencer (54.02) and the 16-year-old Sydney McLaughlin who clocked shocking world youth record of 54.15 seconds.

Former world champion Jenny Simpson secured her spot on US team for Rio as she crossed the line first 4;04.74 in the women's 1500m final ahead of Shannon Rowbury and Brenda Martinez.  Meanwhile Matthew Centrowitz outkicked everyone in the last 150m to win the men's 1500m final in 3:34.09. Robby Andrews and Ben Blankenship  also made the US team by taking second and third respectively.