• Reese shocks with 7.31m leap at US Trials in Eugene 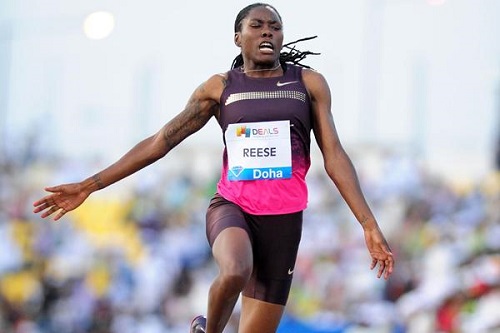 Brittney Reese set a massive personal best of 7.31m to claim the women's long jump title at the 2016 USA Track and Field Olympic trials on Saturday in Eugene, Oregon.

Defending Olympic and World Champion Reese in round 5 jumped 7.31m to  beat into second place former Olympic Champion Tianna Bartoletta, who managed to jump wind aided 7.02m in her opening round. The third place with a jump of 6.93m in the final round took Olympic bronze medalist Janay DeLoach. Reese with her 7.31m moved to  #9 position world all time list and #2 in US all time. The United States women's long jump record of at 7.49m  was set back in 1994 by Jackie Joiner-Kersie.

A day earlier Galen Rupp, the silver medalist in London Olympics, won his 8th straight USA national title by claiming the men's 10,000m race in 27:55.04. Shadrack Kipchirchir came in second in 28:01.52 with Leonard Korir in third.

Trayvon Bromell clocked 9.94 seconds in heat 3 to post the fastest time in the  men's qualifying round. Tyson Gay took heat 2 in 9.96 with Justin Gatlin prevailing in round 2 in 10.03.

Keep TRACK of @usatf trials with these HIGHLIGHTS! ✔️✔️#TrackTown16https://t.co/rP1wziKcEK