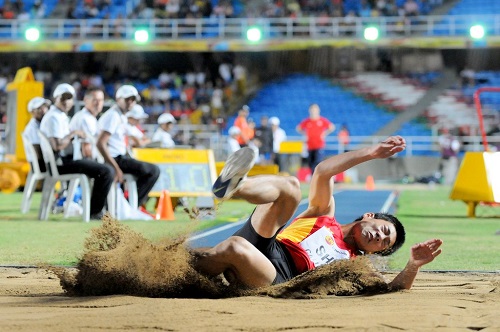 17-year-old Yuhao Shi broke the Asian U20 junior long jump record when he leaped 8.30m at the Chinese championships in Ordos on Monday.

The world junior and youth championships finalist Shi arrived to Chinese championships with a personal best of 8.02m he set on 1 May in Suzhou. On Monday in Ordos, Shi opened the competition with 7.89m followed by a wind aided 8.18m performance in round two. In the next  round Chinese athlete equalled his personal best of 8.02m before breaking his personal best with a leap of 8.15m in round 4.  He had another outstanding jump of  8.13m in round five before concluding the Chinese championships with a monstrous jump of 8.30m (Wind  +1.3m/s) which was a new Asian junior record record.

The previous Asian U20 record belonged to another Chinese athlete  Wang Jianan Asian who is the world championships bronze last year. Meanwhile the world U20 Junior record belongs to Russia's Sergey Morgunov of 8.35m.