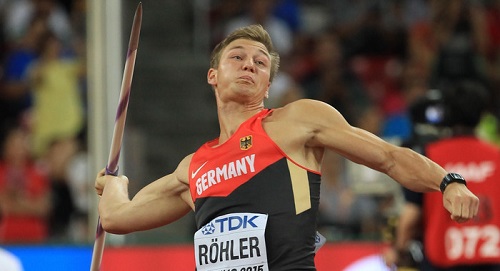 In a very cool and windy night, Germany's Thomas Rohler and Johannes Vetter impressed by claiming top spots at the Oslo Diamond League on Thursday.

In the opening round a little known German thrower Johannes Vetter (GER) threw a massive personal best of  87.11m for the lead. The 4th place finisher at last year's world championships, Thomas Rohler threw 84.71m before improving his mark in round two to an impressive 89.30m to claim the win. Vetter was not able to improve his mark and settled in second. Rohler set a new world leading mark,  meanwhile while Vetter with his personal best performance moved to #3 position in the world's season lists.  Olympic champion Keshorn Walcott of Trinidad and Tobago took third place in a new  season's best mark of 86.35m.

Earlier in the day, Croatian star Sandra Perkovic took the win in the women's discus contest with a throw of 67.10m.

Joe Kovacs of the United States threw 22.01m to win the men's shot put. Poland's Konrad Bukowiecki broke his own world junior record to take second with a toss of 21.14m

Cuba's Alexis Copello took his first ever Diamond League victory by winning men's triple jump with a mark of 16.91m.

Ivana Spanovic of Serbia topped the women's long jump with a leap of 6.94m in final round.