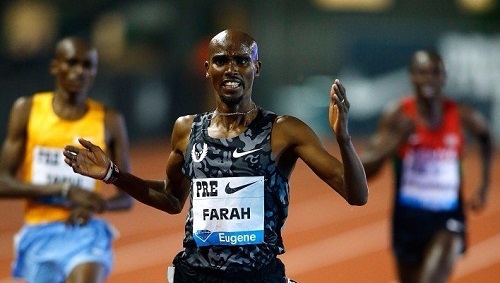 Farah crossed the finish line after 7:32.62 and  shaved  0.1 seconds from legendary David Moorcroft's British 3000m record at the Diamond League meeting in Birmingham.

His victory Farah dedicated to Boxing legend Muhammed Ali, who had died a day earlier at age of 74.

"It was a tribute definitely to Muhammad Ali,"

"My sympathy goes to his family, he was a great man.

"He was a real influence on me as I wrote in my biography, I looked up to him." Farah Told BBC Sports.

Kenya's Asbel Kiprop set the fastest 1500m time ever run on the British soil as he timed 3:29.33. Kiprop's time is also  the fastest time this year in the world.

His compatriot David Rudisha, the world 800m record holder, clocked 1:13.10 to win a thrilling 600m race over Frenchman Pierre-Ambroise Boise. Rudisha's time was only 0.21 seconds outside of the 600m world record.

Kendra Harrison clocked a meeting record of 12.46 seconds in the women's 100m hurdles. Olympic champion Sally Pearson returned to competition after one year's absence to take 7th in 13.25.

Olympic champion Kirani James of Grenada posted a new meeting record in the one lap race of 44.23 seconds.

In the women's triple jump Colombia's Caterine Ibarguen faced her first defeat since 2012 London Olympics by Kazakhstan's Olga Rypakova. Ibarguen, was beaten into second place in the final round when Rypakova leaped 14.61m just 5 cm farther than Ibarguen had jumped in round 3.

Mutaz Essa Barshim of Qatar cleared 2.37m to set the top mark this year in the world in the men's high jump.