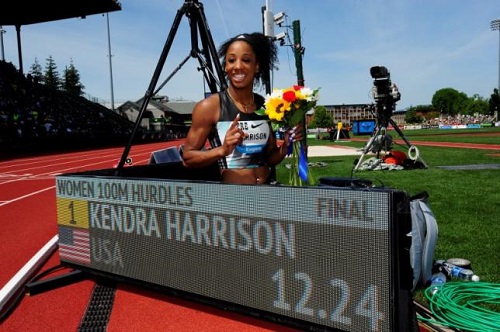 The 2015 NCAA champion Harrison ran a very strong second half of the women's 100m hurdle race to produce the second fastest time in history of 12.24. Her time was only 0.03 seconds short of current world record set by Yordanka Donkova’s back in 1988.

Brianna Rollins who entered the meet as American record holder took second with a time of 12.53 seconds.

“I’m not sure how I can top this, but I’m sure my coach has a few tricks up his sleeve,” Harrison said after the competition.

In her season opener Harrison showed her massive talent by clocking  PB of 12.36 seconds in Athens, GA on April 8.

“It (the 100m hurdles) is such a short race, anything can happen. All the Americans are top in this event,” Harrison added.

Olympic and world champion champion Christian Taylor (USA) in the final attempt beat jumped 17.76m WL to beat his compatriot Will Clasy by 20cm in the triple jump contest.

“I always want to put on a show. I believe I’m a performer. The conditions (in Eugene) are beautiful. I’m also a little greedy and so I was chasing the 18-metre mark, but it’s definitely progress.” Taylor said.