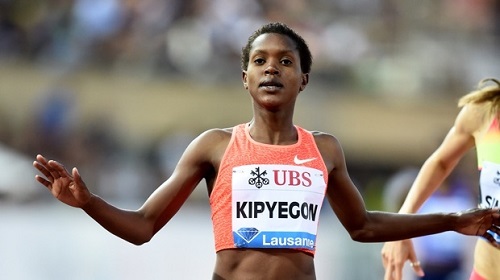 Faith Kipyegon broke the Kenyan record in the women's 1500m at the IAAF Diamond Lague meet in Shanghai on Saturday, May 14.

With a massive kick of 43 seconds over  the last 300m  Kipyegon pushed away from the main pack to win the women's 1500m in 3:56.82, bettering her own national record by 0.16 seconds. She also set a meeting record and the fastest time in the world outdoors this year.

Olympic and world champions David Rudisha had a disappointing race at the second stage of the Diamond League series in Shanghai. Rudisha,  fell behind in last 100m finishing in 5th place in men's 800m race in Shanghai, while Ferguson Cheruiyot Rotich took surprise win in 1:45.68. Rudisha clocked 1:46:24 the slowest time in the 800m race since 2011.

Renaud Lavillenie was beaten into second place men's pole vault contest by Sam Kendricks who set a new personal best of 5.88m. Lavillenie with difficulties managed to clear 5.83m. World champion Shawn Barber (CAN) took third in the pole vault competition with a mark of 5.70m.

Muktar Edris of Ethiopia kicked away in the home stretch to record a new world lead of 12:59.96 in the men's 5000m race.