After his fine performance at the World Half Marathon Championships in Cardiff nine days ago Abayneh Ayele has been added to the elite field of the Haspa Marathon Hamburg. The Ethiopian was fourth in these championships and now belongs to the favourites in Germany’s biggest spring marathon. Adding other running events staged parallel to the marathon a total of 23,000 athletes are expected to participate on April 17. Online entries are still available at: www.haspa-hamburg-marthon.de 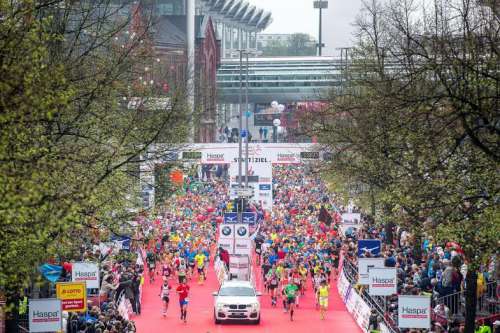 Seven men are on the start list with personal bests of sub 2:07:30. While Ethiopia’s Feyisa Bekele is the fastest on the list with a time of2:06:26 the winner from two years ago returns to Hamburg: Shumi Dechasa clocked 2:06:43 in 2014, a time that still stands as a record of Bahrain. Abayneh Ayele is the third fastest in the field with 2:06:45. However his performance in rain swept Cardiff suggests that he is ready to improve his personal best. The Ethiopian just missed out on a bronze medal at the world championships, when he lost a sprint finish against the great Mo Farah (Great Britain). While fellow-Ethiopian Tadese Tola had to cancel his start in Hamburg due to lack of form after an illness Philemon Rono looks to add to his strong performances in the „Hansestadt“. Two years ago he was third, then he added a fourth place in 2015.

Ethiopia’s Meseret Hailu heads the women’s elite field. The defending champion intends to attack the course record of 2:24:21. A year ago she took the race in 2:25:41. Hailu’s personal best stands at 2:21:09. Organisers announced today that Sarah Chepchirchir has been added to the field. The Kenyan has a fine record in the half marathon, featuring a personal best of 68:07 and a total of five times of sub 70 minutes. She ran her marathon debut in Nagoya last month, but dropped out. Now Chepchirchir wants to give it another try in Hamburg.

Top contenders and their personal bests: