• Kenyans are the favourites, but Germany’s Arne Gabius targets sub 61 minutes in Berlin Half Marathon

Kenya’s world-class runners are the favourites again for the Berlin Half Marathon on Sunday. However it looks likely that for the first time since the 90ies a German runner could be among the top finishers of the men’s race: Arne Gabius aims to improve to a sub 61 minutes’ time. 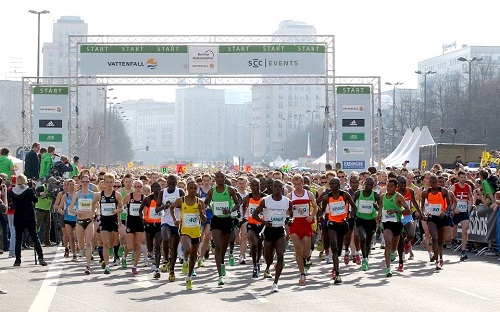 Former World Half Marathon Champion Wilson Kiprop is the fastest runner on the start list. Elizeba Cherono looks to be the favourite in the women’s race. 32,753 runners from 103 nations have entered Germany’s biggest and fastest half marathon.

Wilson Kiprop has a fine record in the half marathon. While he took the World Championship’s gold medal six years ago the 28 year-old has run sub one hour times on five occasions. It was at the Berlin Half Marathon in 2012 where he clocked his personal best of 59:15 finishing second. Due to an injury the Kenyan has not competed internationally since 2014. He was sixth in the World Half Marathon Championships in that year. „On Sunday I want to run a good race again, it is my aim to achieve a sub 60 minutes’ time,“ said Wilson Kiprop during Friday’s press conference. „I suffered of a calf injury in 2014 and could not compete, but now it is all fine.“

Wilson Kiprop’s biggest challenger might be fellow-Kenyan Richard Mengich. He clocked his personal best a year ago when he ran 59:59 for fourth place in Berlin. Mengich ran another four half marathons in 2015 and showed good consistency. Mengich knows the Berlin course very well. On Sunday it will be his fourth start in a row here. In 2013 he placed eighth, a year later he was third.

Jairus Chanchima is another Kenyan who features a sub one hour personal best with a time of 59:43. While he ran this back in 2009 he did not yet achieve such a strong result again. Emmanuel Ngatuny (Kenya) could do well as well. A year ago he was eighth in Berlin with a personal best of 60:58.

Aiming to run sub 61 minutes Arne Gabius could be among some of the top Kenyans on Sunday. Germany’s new marathon star, who broke the 27 year-old national record in Frankfurt 2015 with a time of 2:08:33, is eager to make amendments for last year. While he was going for the German record of 60:34 stomach problems stopped him during the race. At the end Arne Gabius was jogging over the finish line. „It is my goal to clearly improve this time. I want to run sub 61 minutes and I will go with the first group. But I am not sure if I will be able to get near to the German record,“ said Arne Gabius, who has a personal best of 62:09 and will run the London Marathon three weeks after Berlin.

As well as Arne Gabius two other German men running on Sunday have achieved the German Olympic qualifying standard for the marathon last year. Philipp Pflieger, Julian Flügel and Gabius could all make a major step towards Rio on Sunday, if they run below a very moderate 66:30. This is the time asked by the German federation to confirm their form during the spring of the Olympic year.

Returning to the German capital is Elizeba Cherono. The 27 year-old Kenyan was second in the Berlin Half Marathon a year ago with 70:56. In October she improved to 70:10 when winning the Dutch race in Breda. She now hopes to run sub 70 minutes for the first time. While Sophy Jepchirchir is the second fastest on the start list with a time of 71:36 fellow-Kenyan Dorcas Nzembi could be in for a surprise. Just 18 years old she won the Pune Half Marathon in India last December, improving by more than two minutes to 71:48.