The United States athletes dominated the final day of the IAAF World Indoor Championships in Portland by winning total of five events. 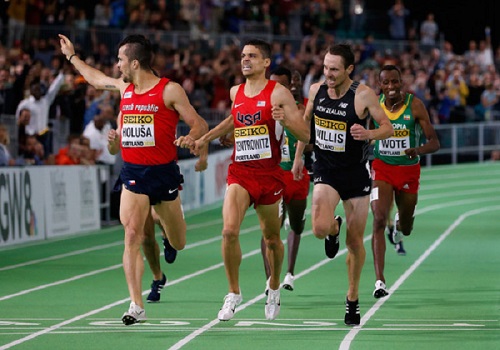 The 18-year-old high jumper  Vashti Cunningham became the youngest female athlete ever to win gold at the world indoor championships.  Cunningham in front of a sell-out crowd of 7191 at the Oregon Convention Centre in Portland cleared 1.96m to win the women's high jump contest.

The second gold for the Americans on final day came in the men's 1500m as Matthew Centrowitz outkicked everyone in the last stretch to cross the line first in 3:44:22. Jakub Holusa of Czech Republic was second just 0.08 seconds behind Centrowitz,  while New Zealand's Nick Willis was third in 3:44:37. Video

Some moments later USA's long jumper Marquis Dendy was announced the world indoor champion after his 8.26 jump in the second round. Australia's Fabrice Lapierre set a new Australian  indoor record of 8.25m to take silver, while Chinese jumper Changzhou Huan was third with a leap of 8.21m. Video

Americans won total of 14 golds, 6 silver and 4 bronze medals at these championships. Second place in the medal standings was Ethiopian team with 2 golds, 2 silver and 1 bronze medals, while French team was third with 1 gold, 1 silver and 2 bronze medals.