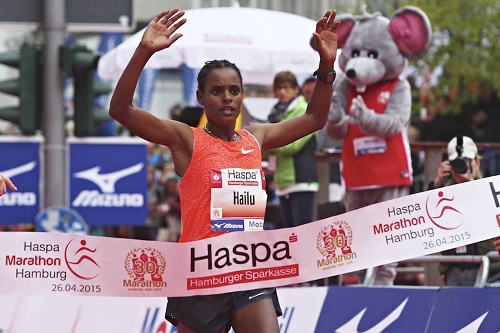 Ethiopia’s world class runner Meseret Hailu will return to the Haspa Hamburg Marathon on April 17 for a title defence and with the course record as her prime objective. Such an achievement would certainly boost her chances in what is always an immensely tough process of Olympic selection for her country’s marathon team. The current course record for the biggest of Germany’s spring marathons is 2:24:12. Approx. 23,000 runners are expected to be on the start line in Hamburg on April 17, including a relay event. Online entries are still available for the Haspa Hamburg Marathon at: www.haspa-marathon-hamburg.de.

Meseret Hailu made headlines in October 2012 when she scored a double triumph, firstly springing a surprise to win the World Half Marathon title and then taking top honours in the women’s field at the Amsterdam Marathon in the same month, setting the world class time of 2:21:09. She was unable to maintain such high standards in the next two years but recovery was clear for all to see in 2015: she won the Haspa Hamburg Marathon in 2:25:41, her first major international win since Amsterdam three years previously and then in the autumn finished third in Berlin with 2:24:33. Her aim on her return to Hamburg is to run faster than her Berlin performance with the course record as her target. This has stood at 2:24:12, set by her compatriot Netsanet Abeyo, for the past three years. Breaking the course record would emphasise her credentials as a contender for an Olympic place in the Ethiopian team, but no guarantee, given their perennial strength in depth. But if Meseret Hailu can improve on her lifetime best of 2:21:09 from her 2012 Amsterdam victory, she would take a solid step towards Olympic selection.

25 year-old Meseret Hailu is relishing the prospect of racing in Hamburg once more since it marked the start of her return to form: “I am really happy to return to Hamburg to defend my title. After a difficult 2014, Hamburg gave me the chance to make my comeback in the marathon. This was the start of a great 2015 and I hope to continue to improve my times.”

“We are delighted that Meseret Hailu is returning to Hamburg with the aim of attacking the course record,” said the race director Frank Thaleiser and added: “Many elite women runners see the Haspa Hamburg Marathon as a great chance to run their national qualifying standard for the Olympics.” Hence it’s no accident that Meseret Hailu will face strong opposition on April 17.

In addition to the defending champion another five runners with personal bests of under 2:30 will be in contention. Perhaps taking note of how Hamburg provided a springboard for Meseret Hailu to regain form, the Mexican record holder Madai Perez is also seeking to recapture her best. The 36-year-old ran her lifetime best of 2:22:59 in Chicago ten years ago but showed she was still a potent force when finishing seventh in the 2013 World Championship marathon in Moscow. She had intended to run in Hamburg two years ago but had to withdraw because of injury. It seemed as if her career was over but Perez is aiming to give it fresh impetus in the “Hansestadt” with the objective of qualifying for the Olympics in Rio.

Another making her return to Hamburg is Beata Naigambo. The 35-year-old from Namibia finished third a year ago with a personal best of 2:27:28. She improved further last November, winning the Valencia Marathon in 2:26:57. Among the elite women who should also be among the leaders is the 31-year-old Portuguese Filomena Costa. The winner of the Seville Marathon last year in 2:28:00, she produced a strong performance to finish 12th at the World Championships in Beijing later in 2015. Also among those with personal bests under 2:30 are the Brazilian Adriana da Silva (2:29:17) and Monika Stefanowicz (2:29:28) from Poland.